Peshitta. The Old Testament in Syriac

Editors: Bas ter Haar Romeny and Wido Th. van Peursen
The Peshitta, the Syriac translation of the Old Testament, was made on the basis of the Hebrew text during the second century CE, whilst some books outside the Hebrew canon may have been translated at a later stage on the basis of a Greek text. It is an important source for our knowledge of the text of the Old Testament. Its language is also of great interest to linguists. Moreover, as Bible of the Syriac Churches it is used in sermons, commentaries, poetry, prayers, and hymns. Many terms specific to the spirituality of the Syriac Churches have their origins in this ancient and reliable version. The present edition, published by the Peshitta Institute of the Vrije Universiteit in Amsterdam on behalf of the International Organization for the Study of the Old Testament, is the first scholarly edition of this text. It presents the evidence of all known ancient manuscripts and gives full introductions to the individual books.

The series published an average of two volumes per year over the last 5 years (update 2017). 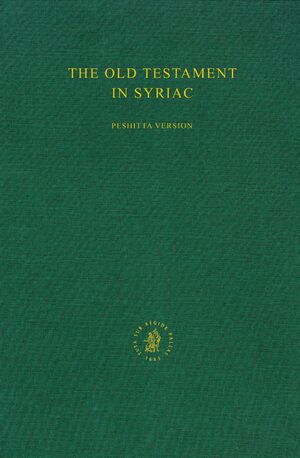