Editors: Willy Clarysse, Koenraad Donker Van Heel, F.A.J. Hoogendijk, and Sven P. Vleeming
The series Papyrologica Lugduno-Batava is intended as an international forum for the publication of papyrological, mainly documentary texts, as well as articles and monographs, on the themes of law and society in Ancient Egypt, in particular in the Graeco-Roman period.
The focus of the series lies on the Greek and Demotic sources, however attention is also given to documents in Hieratic, Coptic and Latin.
The series is a publication of the Foundation for the Papyrological Institute of the University of Leiden. The aim of the Foundation is the promotion of the study of Greek and Demotic papyrology in Leiden.
All publications in this series are peer reviewed. 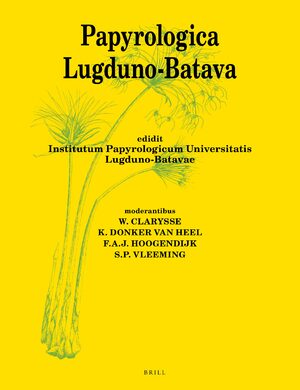