Editors: Kenneth Dean, Richard Madsen, and David Palmer
Since the end of the late twentieth century, religion in all its varied forms has come to play an increasingly visible and dynamic role in the transformation of Chinese societies. This vitality of religious practice challenges the secularization theories that are at the heart of modern social science and it directs renewed attention to the role of religion throughout Chinese history. This series features monographs and edited volumes investigating the full range of religious practices in all Chinese societies, including Mainland China, Hong Kong and Macau, Taiwan, as well as overseas Chinese communities throughout Southeast Asia and elsewhere. It includes research from all disciplines in the social sciences and humanities that describes, documents, and interprets religious practices, beliefs, and the many forms of religious community in Chinese societies. 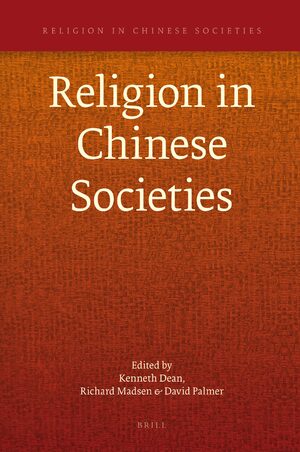 Contact sales
Kenneth Dean, Head, Professor, Department of Chinese Studies, National University of Singapore. His latest book is Ritual Alliances of the Putian Plains, 2 vols. (Leiden, Brill, 2010). He recently directed the documentary Bored in Heaven (2010).
Richard Madsen (Ph.D. Harvard 1977) is Distinguished Professor of Sociology at the University of California, San Diego. He has written 12 books on various aspects of religion and morality in both America and China. His most recent book is Democracy’s Dharma: Religious Renaissance and Political Development in Taiwan (University of California Press, 2007).
David A. Palmer is Associate Professor in the Department of Sociology and fellow of the Hong Kong Institute for the Humanities and Social Sciences at Hong Kong University. He is the author of Qigong Fever: Body, Science and Utopia in China (Columbia University Press, 2007) and co-author of The Religious Question in Modern China (University of Chicago Press, 2010).