Editor: Bridget Heal
For more than two decades the St Andrews Studies in Reformation History series has consistently published high-quality, original research in the field of early modern religious history. Interpreting the Reformation in its very broadest sense, and consciously fostering an interdisciplinary approach, the series has helped shape not only current interpretations of the Reformation, but views of early modern Institute in general. Focusing initially on ecclesiastical issues surrounding Protestant reform, the series quickly generated research that underlined how the ripples of the Reformation spread to virtually every corner of Europe, both Protestant and Catholic. From family life, education, literature, music, art and philosophy, to political theory, international relations, economics, colonial ventures, science and military matters, there were few aspects of life that remained untouched in some way by the spirit of religious reform. As such, all these topics and many more are dealt with by titles within the series, offering fascinating new perspectives on the formative years of modern Europe.
Alongside research volumes and thematic collections, the series also includes critical editions of important primary sources, bibliographical studies and new translations of influential Reformation works previously unavailable to English speaking scholars. By offering this rich mix of approaches and topics, the St Andrews series continues to provide an invaluable platform for the publication of international scholarship in a dynamic and often controversial area of historical study.

This series was published by Ashgate until January 2016. For volumes published before 2016, please contact Routledge, which acquired Ashgate in 2015. 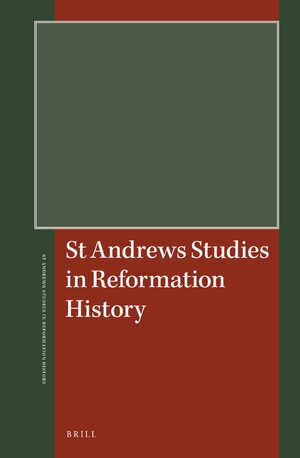