Series Editors: Johannes Preiser-Kapeller, Roland Wenzlhuemer, and Elizabeth A. Zanoni
Historiography has long considered states and other organizations central actors in the making of history. Migrants, men and women and sometimes children, cross state borders in pursuit of life-projects or, at the minimum, to secure incomes. Involuntary migrants, refugees, exiles, those escaping natural disasters also cross borders. So do forced migrants from slaves and indentured servants in the past, to trafficked human beings in the present. All use their agency to re-establish life-courses, re-unite with family, re-construct social networks or innovatively create new ones.

Global migration history is political history; imperial formations from antiquity up to the modern period depended on the (voluntary and involuntary) circulation of people ranging from administrative and military elites to deportees and slaves. Migrants change statewide history by withdrawing their capabilities from one unsatisfactory polity and adding it to another. They seek options to invest their human capital. Global migration history is also economic history – the mercantile entanglements across ancient and medieval Afro-Eurasia, the 17th- and 18th-century world system, the plantation belt and extractive industries in particular, and 20th and 21st century global capitalism would not have existed without forced migration of slaves and the voluntary migrations of merchants, laborers, and the owners of capital. States militarily sustained this order. In the present, whole states are dependent on migrants’ remittances, other societies on the caregiving labor of migrants. Furthermore, economic and political regimes shape and are shaped by gendered conceptions of mobile people in ways that have produced different experiences for women and men. Migration is and has been global, macro-regional, and micro-regional – the levels interact across continents. Migrants’ lives and the societies they change or, even, create, are transcultural.

The peer-reviewed book series Studies in Global Migration History emphasizes research that addresses migrants’ agency that neither begins nor ends in only one location. It intends to replace traditional centeredness on Europe by perspectives including all macro-regions of the world and movements between them. It also aims to expand the common focus of migration history beyond the modern period with studies targeting earlier centuries and millennia across the globe. The series privileges interdisciplinary approaches and studies of uneven developments of societies and regions.

Authors are cordially invited to submit proposals and/or full manuscripts to either one of the series editors Johannes Preiser-Kapeller, Roland Wenzlhuemer or Elizabeth A. Zanoni, or the publisher at BRILL, Wendel Scholma.

This is a subseries of Studies in Global Social History. 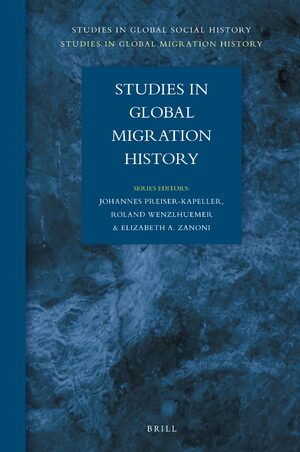