Supplements to The Journal of Jewish Thought and Philosophy

Editors: Elliot R. Wolfson, Christian Wiese, and Hartwig Wiedebach
The series Jewish Thought and Philosophy aims to present new and original scholarship on Jewish thought and philosophy from the Middle Ages to the present day. Based on a broad concept of Jewish intellectual history, it covers medieval and modern halakhic thought, philosophical exegesis of the Bible, medieval and modern philosophy, theology, mysticism, political theory, Jewish social thought and ethics, including the interaction with non-Jewish thought. The focus is on high scholarly standards and innovative methodological approach. While monographs are preferred, excellent collected volumes exploring important aspects of Jewish intellectual history as well as editions and translations of essential texts are also welcome. 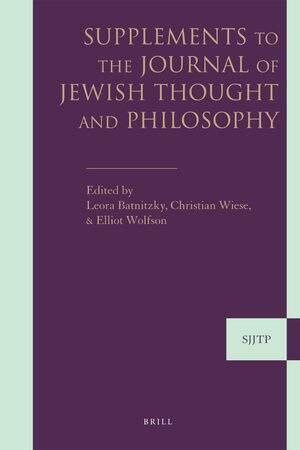 Contact sales
Elliot R. Wolfson is the Marsha and Jay Glazer Professor of Jewish Studies and Distinguished Professor of Religion at the University of California Santa Barbara. Wolfson is a Fellow of the American Academy of Arts and Sciences, the American Academy of Jewish Research, and the American Society for the Study of Religion. His main area of scholarly research is the history of Jewish mysticism but he has brought to bear on that field training in philosophy, literary criticism, feminist theory, postmodern hermeneutics, and the phenomenology of religion. His publications include Through the Speculum That Shines: Vision and Imagination in Medieval Jewish Mysticism (1994), which won the American Academy of Religion's Award for Excellence in the Category of Historical Studies (1995) and the National Jewish Book Award for Excellence in Scholarship (1995); Along the Path: Studies in Kabbalistic Hermeneutics, Myth, and Symbolism (1995); Circle in the Square: Studies in the Use of Gender in Kabbalistic Symbolism (1995); Abraham Abulafia? Kabbalist and Prophet: Hermeneutics, Theosophy, and Theurgy (2000); Language, Eros, Being: Kabbalistic Hermeneutics and the Poetic Imagination (2005), which won the National Jewish Book Award for Excellence in Scholarship (2006); Alef, Mem, Tau: Kabbalistic Musings on Time, Truth, and Death (2006); Venturing Beyond? Law and Morality in Kabbalistic Mysticism (2006); Luminal Darkness: Imaginal Gleanings From Zoharic Literature (2007); Open Secret: Postmessianic Messianism and the Mystical Revision of Menahem Mendel Schneerson (2009), and A Dream Interpreted Within a
Dream: Oneiropoiesis and the Prism of Imagination
(2011), which won the American Academy of Religion's Award for Excellence in the Study of Religion in the Category of Constructive Thinking (2012); and Giving Beyond the Gift: Apophasis and Overcoming Theomania (2014). The volume Elliot R. Wolfson: Poetic Thinking appeared as part of the Brill Library of Contemporary Jewish Philosophers (2015). Wolfson has also published two collections of poetry: Pathwings: Poetic-Philosophic Reflections on the Hermeneutics of Time and Language (2004), and Footdreams and Treetales: 92 Poems (2007).


Christian Wiese, Ph.D. (1997) in Protestant Theology, is is the Martin Buber Professor of Jewish Thought and Philosophy at the Goethe University, Frankfurt am Main. From 2006 to 2010 he was the director of the Centre for German-Jewish Studies and Professor of Jewish History at the University of Sussex. He has been visiting faculty at McGill University, Dartmouth College, and Trinity College, Dublin. His publications include Weiterwohnlichkeit der Welt: Zur Aktualität von Hans Jonas (co-edited with Eric Jacobson, 2003); Challenging Colonial Discourse: Jewish Studies and Protestant Theology in Wilhelmine Germany (2005, Brill); Janusfiguren: Jüdische Heimstätte, Exil und Nation im deutschen Zionismus (co-edited with Andrea Schatz, 2006); The Life and Thought of Hans Jonas: Jewish Dimensions (2007); Redefining Judaism in an Age of Emancipation: Comparative Perspectives on Samuel Holdheim (1806-1860) (edited, 2007, Brill), Modern Judaism and Historical Consciousness: Identities, Encounters, Perspectives (co-edited with Andreas Gotzmann, 2007, Brill); Judaism and the Phenomenon of Life: The Legacy of Hans Jonas: Historical and Philosophical Studies (co-edited with Hava Tirosh-Samuelson, 2008, Brill); and Years of Persecution, Years of Extermination: Saul Friedländer and the Future of Holocaust Studies (co-edited with Paul Betts, 2010). He is also the editor of Hans Jonas's Memoirs (2003). He is currently writing an intellectual biography of Robert Weltsch.

Hartwig Wiedebach is Director of the Hermann Cohen Archives, Zurich. He is also the co-editor of Cohen’s Werke. His most recent book is "Kreuz der Wirklichkeit" und "Stern der Erlösung" (Rosenzweigiana 5, 2010).