Scientific and Learned Cultures and Their Institutions

Editor: Mordechai Feingold
Universities are knowledge-generating institutions, and modern societies regard knowledge, especially cutting-edge knowledge, as the necessary basis for national and international improvement. However, the question of how to organize and disseminate knowledge remains central to the goal and is today a primary concern of academics, policy analysts, organizational sociologists, industrial leaders and government officials. Historians, particularly historians of science and technology and specialists in the history of liberal learning, have contributed to the discussions by offering examples of changes in the organization of knowledge and its delivery, explaining how intellectual innovations and departures enter existing institutions or, encountering resistance, create new structures. But we still lack a systematic or concentrated scholarly understanding of how closely knowledge-generation and teaching styles are influenced by historical circumstances and tied to particular organizational structures, such as academies, departments, faculties, laboratories, schools, research institutes or special programs. It is especially important to understand how alterations in knowledge affect or fail to affect the structures of inquiry and teaching.

Scientific and Learned Cultures and Their Institutions is a peer-reviewed book series that has no restriction as to period, country or discipline. Its guiding editorial principle is to welcome studies that tie science and scholarship to their social conditions and organizational contexts.

Scientific and Learned Cultures and Their Institutions was initially published as a subseries of History of Science and Medicine Library; 10 volumes appeared as part of that subseries. 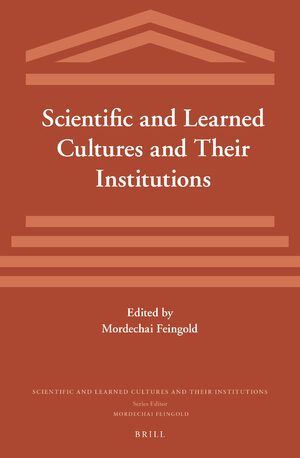