Studies in the Reception of Classical Antiquity

Series Editors: Almut-Barbara Renger, Jon Solomon, and John T. Hamilton
Metaforms publishes monographs and collected volumes devoted to the critical investigation of a broad and diverse field: the reception of Greco-Roman Antiquity. It is particularly committed to research that considers the practices, premises, and constituting effects of creative work that deals directly with past traditions in a variety of media and discourses including, but not limited to, literature, film, and visual art. The editors welcome projects that examine engagements with the major canon as well as with lesser known texts and histories. Studies may concentrate on single works, figures, themes, motifs or concepts as they course through multiple epochs and cultures.

Insofar as each specific case invariably broaches fresh questions and concerns, the series contributes to the growing theoretical configuration of an “aesthetics of reception.” Standard models of work in reception theory—for example, from hermeneutics, pragmatism, and intellectual and conceptual history—stand to undergo serious modification and re-orientation. New methods in comparative philology, metaphorology, and social psychology promise to be especially productive, helping to open the study of reception to new areas of interrogation. 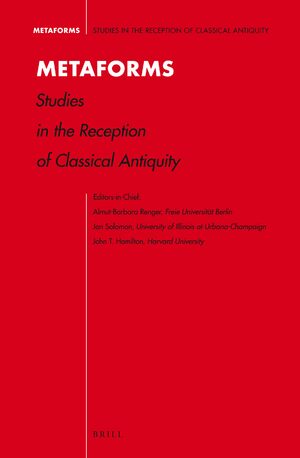 
This interdisciplinary series will have a wide appeal that extends far beyond the field of Classical Studies to include scholars in Literary Studies, Art History, Film and Media Studies, Gender Studies, Religious and Cultural Studies, Intellectual History and Philosophy.