Editors: Andreas Speer, Wouter Goris, Kent Emery, and Georgi Kapriev
Studien und Texte zur Geistesgeschichte des Mittelalters is a peer-reviewed book series dealing with the intellectual history of the Middle Ages, primarily from the perspective of philosophical and theological questions and the history of their treatment. Its aim is, as founder-editor Josef Koch wrote in the preface to Volume 1, "firstly to further our knowledge of medieval intellectual history by scholarly research and secondly to publish critical editions of important texts".

The series thus has three areas of emphasis:
1. Critical Editions, with doctrinal and text-critical introductions, of the (primarily Latin) works of medieval authors, which are of particular relevance to an understanding of medieval intellectual life and which fall outside the sphere of the major Omnia Opera editions of Albertus Magnus, Thomas Aquinas, Duns Scotus, etc.
2. Studies and Monographs, both on the history of paradigms and questions in particular branches of scholarship and on individual thinkers and traditions, as well as on the form and function of institutions, in as far as they were important to medieval intellectual life.
3. Collaborative volumes with contributions from various authors on specific and unitary themes, which address problems in current research. 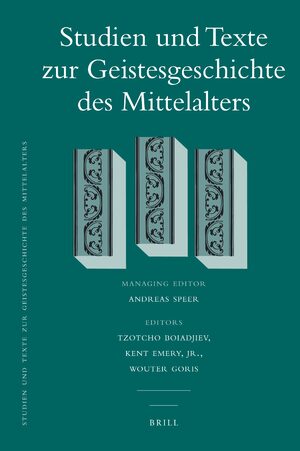 Andreas Speer (DPhil 1986, Habil. 1994) is Full Professor at the University of Cologne and Director of the Thomas Institute there. He works on the history of medieval philosophy (especially of the 12th and 13th centuries) and on issues in metaphysics, epistemology, natural philosophy, aesthetics and the relation of philosophy and wisdom. His publications include The epistemic circle: Thomas Aquinas on the foundation of knowledge (2004) and Die entdeckte Natur: Untersuchungen zu Begründungsversuchen einer "scientia naturalis" im 12. Jahrhundert (1995).
General Editor:
Andreas Speer

Those interested in the philosophy, theology and science of the middle ages.