Series Editors: Dominik Wujastyk, Paul Ulrich Unschuld, and Charles Burnett
The Sir Henry Wellcome Asian Series was established in 1995 in order to make available fine editions of the medical and scientific classics of Asia. The primary aim is to publish texts in their original languages, such as Chinese, Arabic, and Sanskrit. The Series also publishes translations of such editions into English, French or German. Additionally, the Series includes works that cover philological, biographical and bibliographical aspects of the field, and other works that promote knowledge of the textual basis of the subject, covering all periods up to modernity.
It is the view of the editors of the Series that for progress in understanding the history of Asian medicine and the allied sciences it is necessary to have access to critical editions of the surviving manuscripts and pre-modern books, in their original languages. Without such a firm textual basis, historical scholarship is built on an unsure foundation. The Series exists to provide readers with a reliable source of such works, and to provide text editors with a channel through which their specialized works may be published.
As well as strictly text-based publications, the series also welcomes high-quality secondary literature from a wide variety of disciplines and methodologies, including history, social sciences, and economics, provided they are solidly founded on clearly identified primary sources, and in some way illuminate such sources and their meaning for medical and scientific history. The series editors encourage scholars to embed their works in the wider context of history of science and medicine.
The Series is named after Sir Henry S. Wellcome (1853--1936) who did so much in his lifetime, and afterwards through the Trust that bears his name, to support and stimulate the study of the history of medicine. The series is supported by the Wellcome Centre for the History of Medicine at UCL, London, and the Institut für Geschichte der Medizin, Munich. 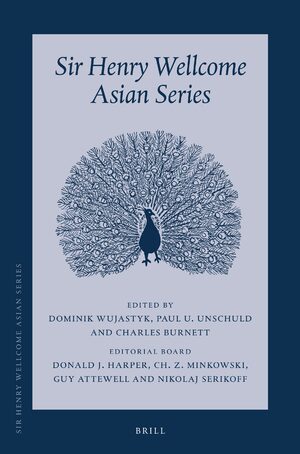 Contact sales
The Sir Henry Wellcome name is used under licence from the Wellcome Trust. The volumes in this series are published with financial support from the Wellcome Trust Centre for the History of Medicine at UCL.
The peacock logo of the series was drawn by the artist Phyllida Legg. Past members: Lawrence I. Conrad Guy Attewell Lutz Richter-Bernburg Ronald E. Emmerick