Yearbook of the Research Centre for German and Austrian Exile Studies

The Research Centre for German and Austrian Exile Studies was founded in 1995, basing itself at the Institute of Germanic Studies of the University of London. Dr Anthony Grenville became Chairman of the Research Centre, whose members are Professor Charmian Brinson, Professor Richard Dove, Dr Marian Malet, Dr Jennifer Taylor, Dr Jana Buresova, Rachel Dickson, Dr Andrea Hammel, Dr Bea Lewkowicz, Sarah MacDougall, Dr Anna Nyburg, Professor Andrea Reiter and Professor Ian Wallace, with Dr Malet and Dr Taylor as Honorary Secretary. The aim of the Research Centre is to promote research in the field of German-speaking exiles in Great Britain. To this end it organises conferences and publishes their proceedings, holds research seminars, and publishes its own peer-reviewed Yearbook. Its members cooperate in the writing of scholarly studies, including a book about the German-speaking refugees from Hitler in Britain, Changing Countries, and a study of the Austrian Centre in London, 1939-47. Though the Research Centre has primarily concerned itself with the German-speaking refugees from Nazism in Britain, it aims to extend its scope to include German-speaking exiles of other periods and comparable groups such as the Czech refugees from Hitler or Italian anti-Fascists. Given its location near the heart of the principal centre of settlement of the refugees from Germany, the Research Centre readily provides advice and useful contacts to scholars and postgraduates working in the field.

The editors welcome contributions relating to any aspect of the field of German-speaking exile in Great Britain, not limited to the refugees from Hitler in the mid-twentieth century. Articles should be sent on disk and in hard copy to the Hon. Secretary, Research Centre for German and Austrian Exile Studies, Institute of Germanic and Romance Studies, Senate House, Malet Street, London WC1E 7HU. A style sheet is available from the Hon. Secretary. 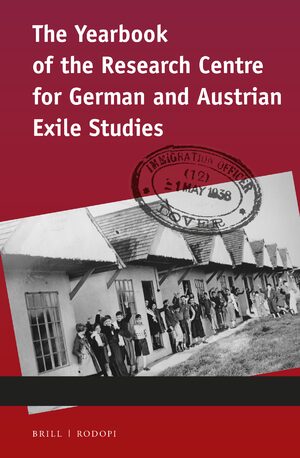 “[The] Yearbook of the Research Centre for German and Austrian Exile Studies has established itself as a must-read for anyone interested in the field of Exile Studies in Britain and internationally.”
The Modern Language Review 100/3 (2005), pp. 855-6.