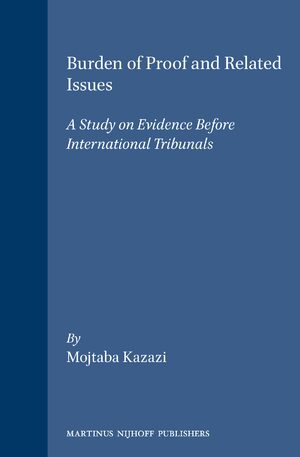 Burden of Proof and Related Issues

A Study on Evidence Before International Tribunals

The long experience of the author as a judge in a civil law system, his intimate knowledge of the work of the Iran-United States Claims Tribunal in The Hague, and currently with the United Nations (Security Council) Compensation Commission for Claims against Iraq have made him eminently well equipped to address the subject competently, both from a theoretical and practical perspective.
Hardback

€232.00$288.00
Hardback
Add to Cart
Note by the series editor. Foreword. Preface. Abbrevations. Part One: Concept and Generalities. I. Concept and Generalities. Part Two: General Aspects of the Burden of Proof. II. Claimant's duty: Actori Incumbit Probatio. III. Collaboration of parties: respondent's role IV. Authority and duties of international tribunals with respect to the burden of proof. V. Rules of the burden of proof as principles of international law. Part Three: Particular Issues Concerning the Burden of Proof. VI. Presumptions and burden of proof. VII. Practical aspects of the collaboration of parties. VIII. Standard of proof. IX. Conclusions. Bibliography. Table of cases. Index.