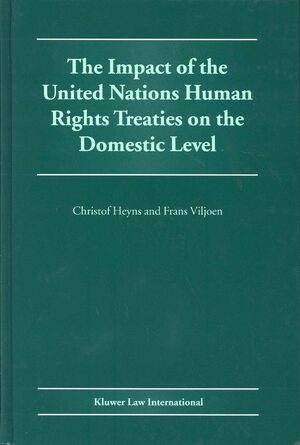 Editors: Christof Heyns and Frans Viljoen
The six main United Nations human rights treaties enjoy almost universal ratification today. Almost 80 per cent of the possible ratifications have been made, and every Member State of the UN has ratified at least one of these treaties.
The nearly universal acceptance of the treaties on the formal level, however, does not automatically translate into the norms contained in these documents being made a reality in the lives of the billions of people living in these countries. The treaty system is notoriously weak in terms of international enforcement, and there is a general suspicion that it has had little impact at the domestic level.
Mechanisms to improve the international enforcement mechanisms of the six main treaties have been a topic of discussion and research for many years, but the domestic impact of the treaties has never been investigated in a systematic and comprehensive manner.
This book constitutes the most ambitious attempt so far to establish the impact of the treaties at the domestic level. The following treaties in 20 United Nations Member States are investigated: the Convention on the Elimination of All Forms of Racial Discrimination, the Covenant on Economic, Social, and Cultural Rights, the Covenant on Civil and Political Rights, the Convention on the Elimination of All Forms of Discrimination Against Women, the Convention Against Torture, and the Convention on the Rights of the Child.
This book reflects the findings of 20 researchers, based in the countries investigated, under the leadership of Professors Christof Heyns and Frans Viljoen of the Centre for Human Rights, University of Pretoria, in a study done in co-operation with the United Nations High Commissioner for Human Rights.
The influence of the treaties in each of the 20 countries is investigated in respect of its influence on the continuation, legislation, court cases, policies and practices, and the impact of the treaty system in civil society.
In an overview chapter by the study leaders based on a comparison of the available data, common trends and patterns are identified, and recommendations about reforms on the national and international level are made.
This is a book that should be read by all those interested in the development of the international human rights system.
Hardback