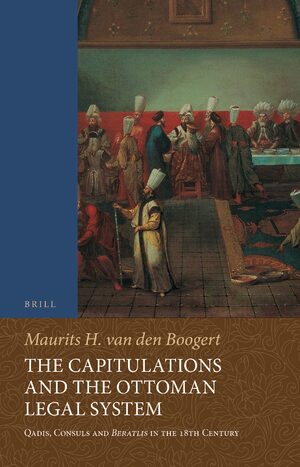 The Capitulations and the Ottoman Legal System

Qadis, Consuls and Beratlıs in the 18th Century

Author: Maurits van den Boogert
Pre-modern Western sources generally claim that European mercantile communities in the Ottoman Empire enjoyed legal autonomy, and were thus effectively immune to Ottoman justice. At the same time, they report numerous disputes with Ottoman officials over jurisdiction (“avanias”), which seems to contradict this claim, the discrepancy being considered proof of the capriciousness of the Ottoman legal system. Modern studies of Ottoman-European relations in this period have tended uncritically to accept this interpretation, which is challenged in this book.
E-Book (PDF)

€49.00$59.00
​
Add to Cart
Maurits H. van den Boogert, Ph.D. (Leiden, 2001) is the (co-)editor of four volumes on Ottoman-European relations, including The Ottoman Capitulations: Text and Context (Rome, 2003, with Kate Fleet) and Friends and Rivals in the East (Brill, 2000, with Alastair Hamilton and Alexander de Groot). In 2010 he published Aleppo Observed: Ottoman Syria Through the Eyes of Two Scottish Doctors, Alexander and Patrick Russell (Oxford University Press). He is now the Publishing Director for Middle East, Islam, and African Studies at Brill.
"[...] Boogert's analysis is clear, without any logical or methodological fallacies, based on extensive documentation while his conclusions are well founded, illuminative and innovative."
Demetrios Papastamatiou in Journal of Oriental and African Studies (JOAS) 20 (2011), 321-324.
Introduction
1. The Sultan’s Promise
2. The Protection System
3. Avanias: Misrepresentations of the Ottoman
4. The Division of Estates
5. Bankruptcy
6. Theft
7. Conclusion
All those interested in legal history, the history of Islamic law, the history of the Ottoman Empire, the history of European-Ottoman relations, as well as historians of the Middle East in general.