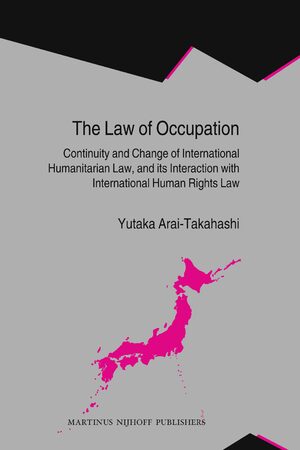 The Law of Occupation

Series:  International Law in Japanese Perspective, Volume: 11
Author: Yutuka Arai
This monograph analyses the historical evolution of the laws of occupation as a special branch of international humanitarian law (IHL), focusing on the extent to which this body of law has been transformed by its interaction with the development of international human rights law. It argues that a large part of the laws of occupation has proved to be malleable while being able to accommodate changing demands of civilians and any other persons affected by occupation in modern context. Its examinations have drawn much on archival research into the drafting documents of the instruments of IHL, including the aborted Brussels Declaration 1874, the 1899/1907 Hague Regulations, the 1949 Geneva Conventions and the 1977 Additional Protocol I.
After assessing the complementary relationship between international human rights law and the laws of occupation, the book examines how to provide a coherent explanation for an emerging framework on the rights of individual persons affected by occupation. It engages in a theoretical appraisal of the role of customary IHL and the Martens clause in building up such a normative framework.

$319.00
​
Add to Cart
Yutaka Arai-Takahashi is a senior lecturer in international law and international human rights law at University of Kent (Canterbury, UK and Brussels, Belgium).
"...the book is bound to find a significant place in international legal scholarship, even outside the law of occupation, since it is well and thoroughly researched."
-Konstantinos Mastorodimos, School of Law, Queen Mary College, University of London