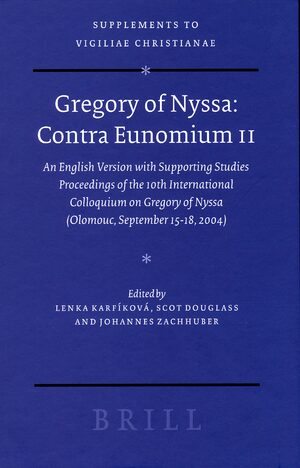 An English Version with Supporting Studies - Proceedings of the 10th International Colloquium on Gregory of Nyssa (Olomouc, September 15-18, 2004)

€203.00$251.00
​
Add to Cart
Lenka Karfíková studied Protestant and Catholic Theology in Prague and Eichstätt. She is now professor of Philosophy at the Protestant Theological Faculty and at the Philosophical Faculty at Charles University in Prague (Czech Republic). Her publications include De esse ad pulchrum esse: Schönheit in der Theologie Hugos von St. Viktor, Turnhout (Brepols) 1998, and Gregory of Nyssa: God and Man's Infinity (in Czech), Praha (Oikúmené), 1999. At the moment she is finishing a book on Grace and Will in Augustine.
Scot Douglass received his Ph.D. in Comparative Literature at the University of Colorado where he is an Associate Professor in the Herbst Program of Humanities and Director of the Engineering Honors Program. His recent book, Theology of the Gap: Cappadocian Language Theory and the Trinitarian Crisis, is the first volume of a three-part study exploring language, literature and the desire for God.
Johannes Zachhuber holds a D.Phil. in Theology from Oxford (1997) and is currently Fellow in Theology at Trinity College, Oxford, and Lecturer in Modern Theology at Oxford University. His publications include Human Nature in Gregory of Nyssa. Philosophical Background and Theological Significance, Leiden (Brill) 2000. At the moment he is writing a book on attempts to construct a modern theology in the 19th century.