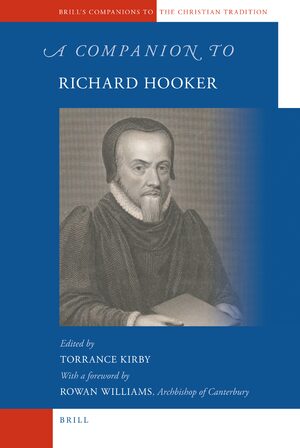 A Companion to Richard Hooker

Editor: Torrance Kirby
Richard Hooker was a learned philosophical theologian and engaged polemicist of the later sixteenth century who explained and defended the Elizabethan religious and political settlement, and shaped definitively the self-understanding of the English ecclesiastical establishment for centuries to come. This Companion to Richard Hooker brings together a representative body of contributors with a view to offering a summary of the current state of scholarly debate and a synthesis of emerging trends in criticism. Contributions to this volume reflect the major current trends of scholarly opinion on Hooker’s place within the mainstream of Protestant reform. This Companion aims to provide a comprehensive and systematic introduction to Richard Hooker’s life, works, thought, reputation, and influence.

€171.00$214.00
​
Add to Cart
W.J. Torrance Kirby, DPhil in Modern History, Oxford University, is Professor of Church History at McGill University. He has published on various aspects of Reformation thought. His most recent books are The Zurich Connection and Tudor Political Theology (2007) and Richard Hooker, Reformer and Platonist (2005). He previously edited another collection of essays on Hooker titled Richard Hooker and the English Reformation (2003).
"A finely accomplished project, a considerable editorial achievement, and a useful addition to Hooker studies. Libraries that cover sixteenth-century English theology, literature and politics will need to invest in this book. Teachers as well as students of Hooker will want to have it to hand." – Paul Avis, University of Exeter, in: Ecclesiology 8/3 (2012), pp. 416- 420
"This Companion is an excellent introduction to a complex and often verbose theologian, and in places it is clearer on Hooker's thought than he was himself". – Bryan Spinks, Yale University, in: Church History and Religious Culture 90/2-3 (2010)
“Hooker, sein Werk und dessen Wirkungsgeschichte werden mit ansteckender Liebe zum Detail in ihre ursprünglichen geschichtlichen Bezüge eingeordnet“. – Martin Ohst, Bergische Universität Wuppertal, in: Sehepunkte, 10/3 (2010)

Students of English Reformation history and early-modern thought, of Protestant scholasticism, and especially of the theology and philosophy of Richard Hooker from the level of graduate student to senior research scholar. Anglican seminarians and the educated layman will be interested too.