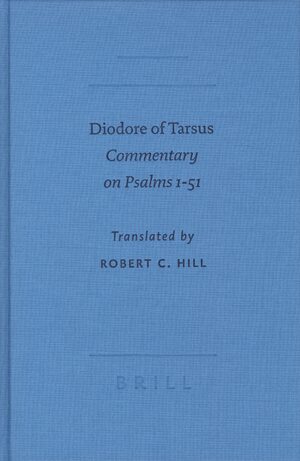 Series:  SBL - Writings from the Greco-Roman World, Volume: 9
Author: Robert C. Hill
Diodore of Tarsus presided over the Antiochene school of interpretation in its heyday. In his sole surviving exegetical work on the Old Testament he formulated the principles of interpreting Scripture taught in that school. Available here for the first time in English is Diodore's commentary on Psalms 1–51, with Robert C. Hill's insightful notes on Diodore's exegesis of the Psalter. It was from their mentor Diodore that later Antiochenes Chrysostom, Theodore, and Theodoret derived the distinctive principles underlying the theology that figured prominently in debate and controversy in the fourth and fifth centuries. Patristic scholars and students of the Psalms look to the approach of the great Eastern commentators as an important development in the history of exegesis, Christology, morality and spirituality and will find this translation an invaluable asset.

Robert C. Hill, Honorary Fellow and Adjunct Professor at Australian Catholic University, has translated many of the Old Testament commentaries of the Antioch Fathers, and written on their exegetical, hermeneutical, and theological features.
' This volume presents for the first time in any modern language a translation of the Commentary of Diodore, bishop of Tarsus in Cilicia (late fourth century C.E.) on Psalms 1–51. A native of Antioch and founder of the distinctively Antiochene method of exegesis, Diodore was condemned by the ecumenical council of Constantinople in 553 for being the intellectual father of Nestorius, and only by accident has this Commentary survived. Despite its linguistic and textual blindspots, the work gives, as no other extant work does, a clear indication of the hermeneutical principles of the Antiochene method of exegesis, which was as influential in Christian antiquity as it was controversial. More than any other modern scholar, in his series of gifted translations Robert Charles Hill has unlocked for expert and amateur alike the representatives of the early Christian method of Antioch: Diodore, his pupils John Chrysostom and Theodore of Mopsuestia, and their successor Theodoret of Cyrus. One could be forgiven for thinking that these ancient exegetes wrote in English.' Pauline Allen, Director, Centre for Early Christian Studies, Australian Catholic University; and President, International Association of Patristic Studies ' With this work, and with his previous translations of Antiochene commentaries (Theodore on the Twelve Prophets, Chrysostom on the Psalms, and Theodoret on the Psalms and Paul's letters), Hill has provided an invaluable service to English-speaking students of early Christian exegesis.' Martin Albl, Review of Biblical Literature, 2005 ' Hill is to be commended for the fine service he has done to the academic community through his labors. On the one hand, the book is recommended for Old Testament scholars interested in what is called Receptionsgeschichte in general, and in an Antiochene-patristic perspective on Pss 151 in particular. On the other hand, Hill's translation may be of interest particularly to patristic scholars themselves, both from the viewpoint of classical language studies and church history. It is these scholars, maybe more than their Old Testament colleagues, who will no doubt appreciate Hill's contribution for the pioneering achievement that it is.' Dirk Human, Review of Biblical Literature, 2005