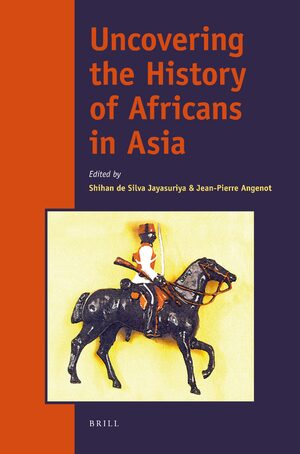 Uncovering the History of Africans in Asia

Editors: Shihan de Silva Jayasuriya and Jean-Pierre Angenot
The presence of Africans in Asia has been overshadowed by the tragedy of Atlantic slavery. Identifying Africans in Asia therefore challenges contemporary scholarship. Within this context, the processes of assimilation and marginalisation hinder identification of African migrants. This book demonstrates the multiplicity of roles performed by Africans and the heights that a few of them reached, even in a single generation. Drawing on a variety of sources, both oral and documented, this book reveals the extent of the African presence in Asia.
E-Book (PDF)

Jean-Pierre Angenot, PhD in African Linguistics (University of Leiden) and PhD in Romance Philology (University of Brussels). He is a Professor of Ethnolinguistics at the Federal University of Rondonia (Brazil). In 2003, he was the co-founder, with Dr Shihan de Silva Jayasuriya, of TADIA (The African Diaspora in Asia), an international academic programme associated with the UNESCO Slave Route project. He is the author of over one hundred and fifty publications.
".. the articles in this volume provide a useful entry point to a rapidly growing field of study" Andrea Major
University of Edinburgh, UK in Contemporary South Asia, Sept. 2009
Foreword by Tukumbi Lumumba-Kasongo