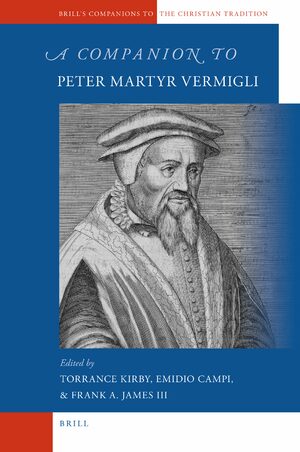 A Companion to Peter Martyr Vermigli

Volume Editors: Torrance Kirby, Emidio Campi, and Frank A. James III
The great Florentine Protestant reformer Peter Martyr Vermigli (1499-1562) made a unique contribution to the scriptural hermeneutics of the Renaissance and Reformation, where classical theories of interpretation derived from Patristic and Scholastic sources engaged with new methods drawn from Humanism and Hebraism. Vermigli was one of the pioneers of the sixteenth century in acknowledging and harnessing the biblical scholarship of the medieval Rabbis. His eminence in the Catholic Church in Italy (until 1542) was followed by an equally distinguished career as theologian and exegete in Protestant Europe where he was professor successively in Strasbourg, Oxford, and finally in Zurich. The Companion consists of 24 essays divided among five themes addressing Vermigli’s international career, hermeneutical method, biblical commentaries, major theological topics, and his later influence.

€213.00$266.00
​
Add to Cart
W.J. Torrance Kirby, DPhil (1988) in Modern History, University of Oxford, is Professor of Ecclesiastical History at McGill University. He has published extensively on the thought of Richard Hooker, including his editing of the recent Brill Companion to Richard Hooker (2008).

Professor Emidio Campi is Director of the Institute for Swiss Reformation History and occupies the chair in Church History at the University of Zurich. He jointly edited Vermigli’s Commentary on Aristotle’s Nicomachean Ethics (2006) and Petrus Martyr Vermigli: Humanismus, Republikanismus, Reformation (2002).

Frank A. James III is President and Professor of Historical Theology at the Reformed Theological Seminary in Orlando, Florida. His books include Peter Martyr Vermigli and Predestination (1998) and a translation of Vermigli titled Two Theological Loci: Predestination and Justification (2003).

“While the size and subject matter might intimidate some readers at first glance, the collection is quite engaging […]. It will be of interest not only to biblical scholars and professors of theology, but also to historians, philosophers, philologists and those interested in the history of higher education. […] This volume certainly reveals for readers the dynamism of Peter Martyr Vermigli’s thought and makes a convincing argument that a better understanding of the hermeneutics of this Italian-born Protestant reformer will lead to a better understanding of the Renaissance and the Reformation and the relationship between the two.”
Carrie Euler, Central Michigan University. In: The Journal of Ecclesiastical History, Vol. 62, No. 2 (April 2011), pp. 397-398.