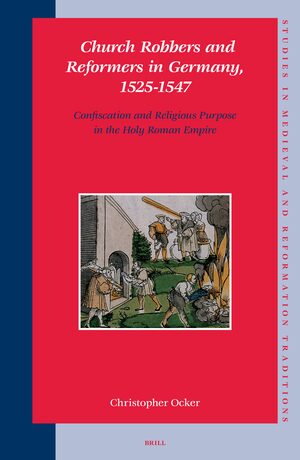 Confiscation and Religious Purpose in the Holy Roman Empire

Author: Christopher Ocker
This is a study of the religious controversy that broke out with Martin Luther, from the vantage of church property. The controversy eventually produced a Holy Roman Empire of two churches.
This is not an economic history. Rather, the book shows how acceptance of confiscation was won, and how theological advice was essential to the success of what is sometimes called a crucial if early stage of confessional state-building. It reviews the character of sacred property in the late Middle Ages, surveys confiscations in Reformation Germany on illustrative examples, summarizes the League of Schmalkalden’s defense of confiscations, systematically studies theological memoranda that shaped a common policy in the League, and shows the role of that common position in religious politics.
Hardback

€125.00$155.00
Hardback
Add to Cart
Christopher Ocker is Professor of History at the San Francisco Theological Seminary and the Graduate Theological Union at Berkeley. He holds the Ph.D. from Princeton Theological Seminary. His most recent book is Biblical Poetics before Humanism and Reformation (Cambridge 2002).
Honorable Mention 2007 Gerald Strauss Prize ' This is a fascinating study of a too-often-ignored issue. The text is full of footnotes that both support his argument and call out for further study on their own.' David M. Whitford, Renaissance Quarterly.
List of Illustrations Abbreviations Preface Introduction 1. Church Property 2. Church Robbers 3. The League of Schmalkalden and the Imperial Chamber Court 4. Theological Advice 5. Toward a Common Position 6. The Schmalkald Recommendation of 1540 7. The Colloquies, the War, and the Peace 8. Dominions Conclusion: Prospect/Retrospect Appendix I. The Theological Recommendation of 1540 Appendix II. The Title Page of Martin Luther’s A Terrible History and Judgement of God on Thomas Müntzer Bibliography Index
Those interested in the rise of Protestantism in Germany, the early modern German state, the role of religion and theology in politics, and the history of secularization.