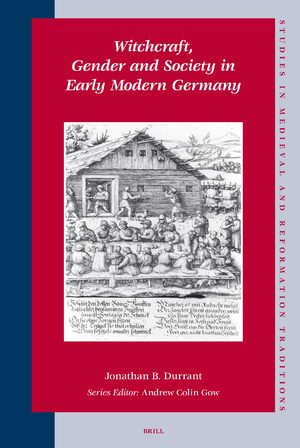 Author: Jonathan B. Durrant
Recent witchcraft historiography, particularly where it concerns the gender of the witch-suspect, has been dominated by theories of social conflict in which ordinary people colluded in the persecution of the witch sect. The reconstruction of the Eichstätt persecutions (1590-1631) in this book shows that many witchcraft episodes were imposed exclusively ‘from above’ as part of a programme of Catholic reform. The high proportion of female suspects in these cases resulted from the persecutors’ demonology and their interrogation procedures. The confession narratives forced from the suspects reveal a socially integrated, if gendered, community rather than one in crisis. The book is a reminder that an overemphasis on one interpretation cannot adequately account for the many contexts in which witchcraft episodes occurred.
E-Book (PDF)

€125.00$155.00
Hardback
Add to Cart
About MyBook
Jonathan Durrant, Ph.D. (2002) in History, University of London, is Senior Lecturer in Early Modern History at the University of Glamorgan. He has published on the witch persecutions and is editor of the Witchcraft Bibliography Project Online.
''Durrant (Univ. of London) offers a sophisticated and refreshing challenge to several conceptions that currently prevail in studies of early modern witch hunting. Focusing on trial transcripts from the German prince-bishopric of Eichstätt during the period 1617-1631, the author makes particular use of confession narratives, finding little to support arguments that witch denunciations reflected local social tensions, gender conflicts, or fears about frightful old women. Nor does the evidence point to the role of agrarian crisis or other material disasters. The words and actions of the accused suggest that these people enjoyed good relationships within their communities; this was not a society riven by tensions or racked by fears of a diabolical sect. True, more women than men were charged, but this was because judicial procedures, especially torture, exaggerated normal social and gender divides. The overall picture of early modern society that emerges here is thus more positive than that conveyed by most scholarship on witchcraft. The hunts were mainly a function of the prince-bishop's program to extirpate heresy, which mirrored the tactics of other Catholic rulers in the Empire. This complex work will prove stimulating and rewarding for scholars with a good background in early modern studies. Summing Up: Recommended. Graduate students and faculty.'' – R. B. Barnes, Davidson College, in: Choice
‘’Durrant’s meticulous and highly readable study reminds us that witchcraft trials need to be interpreted with a careful eye for detail and an interest in the complexities of real life springing from each case […] historians must think outside the rigid categories of good and evil to search for the revealng details in between and to meet a world full of people, just as Jonhatan Durrant has done.’’ - Simone Laqua-O’Donnel, University of Birmighan, in: The Journal of Ecclesiastical History 62/2 (April 2011), p. 405
List of Tables, Maps and Illustrations
Acknowledgements
Abbreviations

PART I
1. Witch-hunting in Eichstätt
2. The Witches

Appendix 1. The Interrogatory of 1617
Appendix 2. Occupations of Suspected Witches or their Households