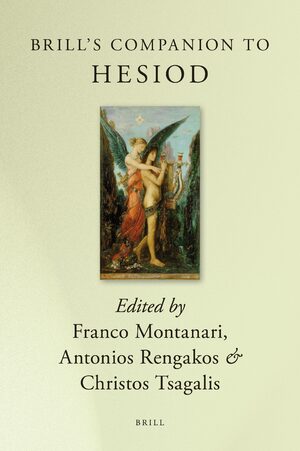 Editors: Franco Montanari, Chr. Tsagalis and Antonios Rengakos
This is the first full-scale companion on Hesiod to appear in English. The twelve contributions included in this volume cover a wide range of aspects of Hesiodic poetry, such as the relation between Hesiod and the literary traditions of the Near East and the entire span of works comprising the Hesiodic corpus, from the Theogony and the Works and Days to the Melampodia and the Aigimios. They also explore the language, style, poetics, and narrative art of Hesiod, as well as his influence on Hellenistic and Roman poetry, but also his reception by the ancient biographical traditions and scholia. The aim of this volume is to supply all those interested in Greek poetry with an up-to-date and comprehensive overview of scholarly approaches to Hesiod and various other works which have come down to us under his name.
E-Book (PDF)

€209.00$259.00
​
Add to Cart
Franco Montanari is Professor of Ancient Greek Literature at the University of Genoa (Italy), a member of international research centers and associations, Director of the “Centro Italiano dell'Année Philologique” and of the "Aristarchus" project on line. He published the new Ancient Greek-Italian Dictionary and several scientific works on ancient scholarship and grammar, archaic Greek epic and other Greek poets of classical and hellenistic periods.

Antonios Rengakos is Professor of Greek Literature at the Aristotle University of Thessaloniki. He has published on Homer, Greek Historiography, Hellenistic Literature. He is the author of Der Homertext und die hellenistischen Dichter (1993) and Apollonios Rhodios und die antike Homererklärung (1994), and has co-edited (with A. Tsakmakis) Brill's Companion to Thucydides (2006) (with Th. Papanghelis) and Brill's Companion to Apollonius Rhodius (2nd ed. 2008).

Christos Tsagalis is Associate Professor of Greek Literature at the Aristotle University of Thessaloniki. He has published on Homer, Hesiod, Greek Historiography, and Epigram. He is the author of Epic Grief: Personal Laments in Homerʼs Iliad (2004), The Oral Palimpsest: Exploring Intertextuality in the Homeric Epics (2008), and Inscribing Sorrow: Fourth-Century Attic Funerary Epigrams (2008).

" A volume useful both to graduate students beginning their study of Hesiod and to scholars." Stephanie Nelson, Religious Studies Review, vol. 37 nr. 2 (2011).
List of Contributors
Abbreviations

All those interested in Hesiod, Archaic Greek epic, reception of Greek literarure, as well as scholars specializing in the poetry and culture of the Near East