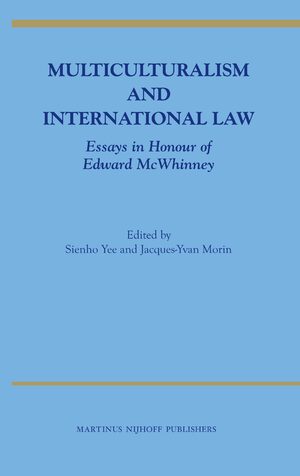 Essays in Honour of Edward McWhinney

Editors: Sienho Yee and Jacques-Yvan Morin
This volume examines the role and influence of multiculturalism in general theories of international law; in the composition and functioning of international organizations such as the ICJ, the ILC, the UN, and the ICC; and in the progressive development of substantive international law regarding issues such as anti-terrorism, cultural identity, the Danish cartoons controversy, indigenous peoples, and cultural exemptions at the WTO.
With Forewords from Boutros Boutros-Ghali and Shigeru Oda, this authoritative volume contains contributions from 36 distinguished scholars from every continent of the world tackling multiculturalism and international law—an ever more topical issue—in honour of, appropriately, Edward McWhinney, an eminent scholar who has spent a substantial part of his life promoting multiculturalism.
E-Book (PDF)