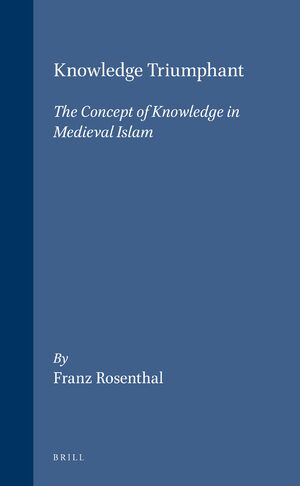 The Concept of Knowledge in Medieval Islam

Author: Franz Rosenthal
In Knowledge Triumphant, Franz Rosenthal observes that the Islamic civilization is one that is essentially characterized by knowledge ( 'ilm), for 'ilm is one of those concepts that have dominated Islam and given Muslim civilization its distinctive shape and complexion.' There is no branch of Muslim intellectual and daily life that remained untouched by the all-pervasive attitude towards 'knowledge' as something of supreme value for Muslim being.
With a new foreword by Dimitri Gutas.
E-Book (PDF)

€89.00$109.00
​
Add to Cart
Franz Rosenthal (1914–2003) was Sterling Professor Emeritus of Arabic and Semitic Studies and scholar of Arabic literature and Islam. Professor Rosenthal was a prolific scholar whose publications ranged from a monograph on Humor in Early Islam to a three-volume annotated translation of the Muqaddimah of Ibn Khaldun to a Grammar of Biblical Aramaic.
"By far the best work on epistemology in Islamic thought, authoritative and always interesting." – Shams C. Inati, in: Routledge Encyclopedia of Philosophy
"Brill’s new “Classics in Islam” series, a systematic reprinting of some of the seminal works in Islamic studies that have been out of print for decades, is a welcome initiative. As Dimitri Gutas, a former student, indicates in his introduction, Rosenthal’s achievement in this monograph is outstanding within an exceptionally productive and influential career. It is also somewhat unusual that a work first published over thirty years ago still remains unsurpassed, even if one may question some of the argument’s details and tendencies. Rosenthal often worked with manuscripts and unedited sources and, while we have the luxury of criticizing his judgments based on our access to superior critical editions, the contribution of the book remains singular." – in: American Journal of Islamic Social Sciences 25/4 (2008)
Foreword
Introduction, Dimitri Gutas
The Knowledge before Knowledge
The Revelation of Knowledge
The Plural of Knowledge
Definitions of Knowledge
Knowledge is Islam (Theology and Religious Science)
Knowledge is Light (Ṣûfism)
Knowledge is Thought (Philosophy)
Knowledge is Society (Education)
Concluding Remark
Index