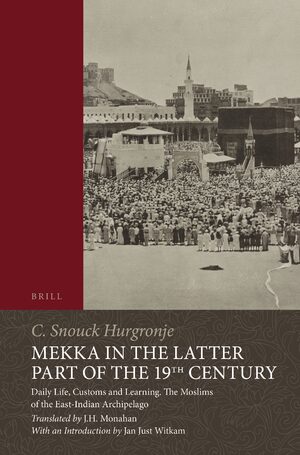 Mekka in the Latter Part of the 19th Century

Daily Life, Customs and Learning. The Moslims of the East-Indian Archipelago

Author: C. Snouck Hurgronje
Editor / Translator: J.H. Monahan
From 1884-1885, Christiaan Snouck Hurgronje stayed in Mecca. He became intimately acquainted with the daily life of the Meccans and the thousands of pilgrims from all over the world. This volume deals with social and family life, funeral customs and marriage. It is a unique insight in one the most important places in islamic culture.
With a new foreword by Jan Just Witkam
E-Book (PDF)

€49.00$59.00
​
Add to Cart
Christiaan Snouck Hurgronje (1857-1936) was a Dutch scholar of Oriental cultures and languages. He visited Mecca in 1884-1885 as one of the first Western scholars of Oriental cultures. He wrote more than 1,400 papers in particular about the position of Islam in the Dutch East Indies and the colonial civil service and nationalism.
"...I can recommend anyone to read (his book on) Atjeh and Mekka. His analysis gives a lot of insight and shows the room there is within Islam" – Anwar Ibrahim, in: NRC Handelsblad
"...stands as a monument to the work of a great Islamist, and as testimony to much of the inner meaning of one of the world's greatest centres of religion." – William R. Roff, in: Journ. of Asian and African Studies, 1972
"...this interesting book of one of the greatest scholars in the field of Islam studies." – in: Bibliotheca Orientalis, 1971
"Jan Just Witkam provides a useful introduction about Hurgronje, his background, residence in Arabia, and later work for the Dutch government in the Dutch East Indies." – in: Choice, Nov. 2007
"It should become an instant "must-read" to a new generation of scholars and be adopted ... to teach social history, social linguistics, Islam, and the late nineteenth-century history of the Middle East." – Isa Blumi, in: American Journal of Islamic Social Sciences 3 (2008)