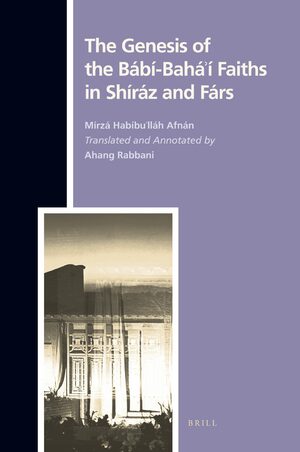 Author: Ahang Rabbani
The Bábí and Baháʾí Faiths represent two of the most important religious
movements of modern times. This book relates the story of the evolution of
the Bábí-Baháʾí community, beginning with the birth of its founder, Siyyid
ʾAlí-Muhammad, known as the Báb, in 1819 and then traced over the next
century and a half in the city of his birth, Shíráz. Its author, Mírzá Habíbuʾlláh
Afnán, was himself born in the house of the Báb, reared by the widow of the
Báb, who shared with him many stories of the Báb’s life, then spent nearly
a year with Baháʾuʾlláh in the ʾAkka-Haifa area, and some ten years in close
proximity to Baháʾuʾlláh’s son ʾAbduʾl-Bahá. He served for the next half century
as the hereditary custodian of the house of the Báb, and as such was uniquely
qualified to tell the story of the Bábí-Baháʾí Faiths in the city of Shíráz in
remarkable and moving detail.
E-Book

€169.00$211.00
​
Add to Cart
Ahang Rabbani, Ph.D. (1981) in Statistics, Virginia Polytechnic Institute, is Director of Research and Development at Invista Company. Ahang Rabbani has published extensively on the history and teachings of the Bábi and Bahá'i religions. His Research Projects inlcude a multi volume series entitled Witnesses to Bábi and Bahá'i History.
All those interested in Iranian history, the development of the Babi-Baha'i Movements and regional history in Iran.