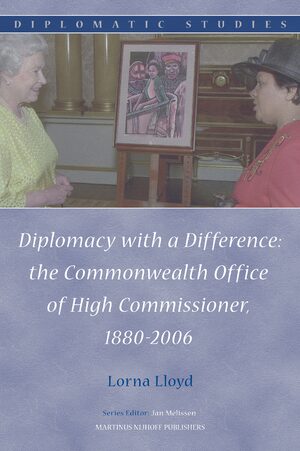 Diplomacy with a Difference: the Commonwealth Office of High Commissioner, 1880-2006

Series:  Diplomatic Studies, Volume: 1
Author: Lorna Lloyd
This book illuminates two familiar phenomena – diplomacy and the Commonwealth – from a new and unfamiliar angle: the atypical way in which the Commonwealth’s members came to, and continue to, engage in official relations with each other. This innovative and wide-ranging study is based on archival material from four states, interviews and correspondence with diplomats, and a wide range of secondary sources. It shows how members of an empire found it necessary to engage in diplomacy and, in so doing, created a singular, and often remarkably intimate, diplomatic system. The result is a fascinating, multidisciplinary exploration of the evolving Commonwealth and the way in which its 53 members and Ireland conduct diplomacy with one another, and in so doing have contributed a distinctive terminology to the diplomatic lexicon.
E-Book (PDF)

$223.00
​
Add to Cart
Lorna Lloyd was educated at the London School of Economics and teaches International Relations at Keele University. She has written Peace through Law. Britain and the International Court in the 1920s (The Boydell Press for the Royal Historical Society, 1997), and is a co-author of International Organisation in World Politics (Palgrave Macmillan, 3rd edition, 2004).
“one of the best [books] on the history of diplomacy to appear in recent years. There is no doubt that it will come to be regarded as the standard work on the subject. No Foreign Ministry should be without it.” – G.R. Berridge

“This meticulous work of scholarship should remain a standard reference and history of its subject for many years to come.” – International Affairs

“In meticulous detail, drawing on documents in the official archives of Commonwealth countries, newspaper reports, personal interviews, and e-mail correspondence with role-players, and various other sources, Lorna Lloyd has put together a detailed history. […] Although the subject of the book is the office of high commissioner, the development of that office and how all its travails played themselves out against the background of the history of the 20th and the early years of the 21st century and the figures involved are also covered. It is a fascinating story in itself, but also a record of how much political attitudes have changed over the past century, and more especially over the past 50 or so years.” - South African Journal of International Affairs

"This substantial and well researched book provides with unique depth and detail, analysis of a little understood and not nowadays much studies aspect of diplomacy - the Commonwealth dimension." - Peter Lyon, British Journal of Canadian Studies 21.2 (2008)

“The author succeeds in providing a fascinating amount of the twists and turns in the origin and evolution of the office of the high commissioner in the context of its historically close association with the Commonwealth . . . . The author deserves praise for the meticulous and extensive citations primarily from declassified British documents.” – International Studies(2009).

“Lloyd’s writing exhibits traditional virtues. Drawing on memoirs and interviews as well as minutes from government archives, she makes her story readable without sacrificing its intricacy of historical detail. As in her earlier book Peace through Law, she demonstrates how the skillfully interwoven strands of law, diplomacy and institutions can illuminate the study of international relations.” - Political Studies Review (2009)
The office of high commissioner
High commissioners and diplomacy

Chapter 7 - Normalisation, early 1960s – mid-1970s
§ Consular relations
§ The Commonwealth’s consular arrangements
§ The 1963 Vienna Convention on Consular Relations (VCCR)
§ Preparation
§ The Conference
§ From the Vienna Conference to consular relations
§ Comings – and goings
§ South Africa
§ Pakistan
§ The Commonwealth Secretariat
§ Meetings of high commissioners and of Commonwealth heads of mission
§ The position of high commissioners
§ Titular flexibility – and orthodoxy
§ CRO diplomacy and the demise of the CRO
§ Britain and the décanat
§ British high commissioners and the décanat in newly-independent states
§ The doyen in London
§ Australian sniping