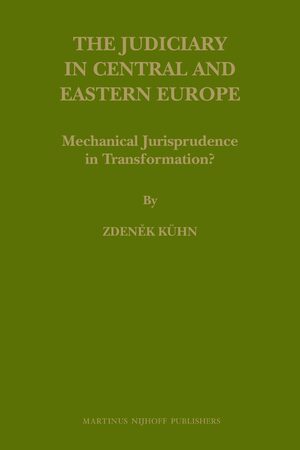 The Judiciary in Central and Eastern Europe

Author: Zdenek Kühn
One of the most widespread problems in post-Communist countries is the quality of the judiciary. The book argues that these problems are intimately linked to the legal culture of Communist law, that an understanding of post-Communist judges necessarily requires an understanding of their Communist predecessors. There seems to be a deep continuity in the methods of legal reasoning employed by lawyers in the region of East Central Europe, starting in the era of Stalinism of the 1950s up to the current post-Communist period, which continuity is manifested in the problems of 1990s and 2000s. Communist legal culture and its aftermath provide an interesting analysis of the development of legal culture in a long-lasting system which was intellectually almost completely separated from the outside world. The book targets the judicial ideology, the conception of law, and the judicial self-perceptions, which are phenomena most likely to be contained in the deepest level of legal culture, that most resistant to change.
E-Book (PDF)

€154.00$191.00
​
Add to Cart
Zdeněk Kühn, Ph.D. (2001) in Law, Charles University; S.J.D. (2006) University of Michigan, is Associate Professor of Jurisprudence at Charles University and Judge of the Czech Supreme Administrative Court (2008). He has published extensively on legal interpretation and methodology.
"This superb book provides a convincing answer to the question of whether the fall of communism in eastern Europe has changed the way judges decide cases."; "I have seen no work of equal quality dealing with the Russian courts; thus I would highly recommend this book to Russian law specialists as well as to those interested in eastern Europe."
Slavic Review, 2012, p. 936, Peter B. Maggs, University of Illinois, Urbana-Champaign.
All those interested in the judiciaries and law of Central and Eastern Europe and post-Communist transitions.