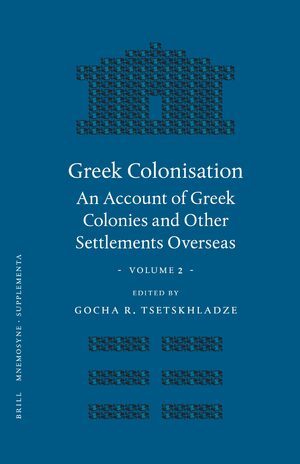 An Account of Greek Colonies and Other Settlements Overseas, Volume Two

Editor: G.R. Tsetskhladze
The 3-volume handbook is dedicated to one of the most significant processes in the history of ancient Greece - colonisation. Greeks set up colonies and other settlements in new environments, establishing themselves in lands stretching from the Iberian Peninsula in the west to North Africa in the south and the Black Sea in the north-east. In this colonial world Greek and local societies met, influenced and enriched each other. The handbook brings together historians and archaeologists, all world experts, to present the latest ideas and evidence. The principal aim is to present and update the general picture of this phenomenon, showing its importance in the history of the whole ancient world, including the Near East. The work is dedicated to the late Prof. A.J. Graham.

This second volume contains chapters on Central Greece on the eve of the colonisation movement, foundation stories, colonisation in the Classical period, the Adriatic, the northern Aegean, Libya and Cyprus.
E-Book (PDF)

€195.00$245.00
​
Add to Cart
Gocha R. Tsetskhladze, PhD (Moscow) in Ancient History and Archaeology, DPhil (Oxford) in Classical Archaeology, teaches Mediterranean and Black Sea archaeology in the University of Melbourne. He has published extensively on the archaeology of Greek colonisation, Anatolia and the Black Sea regions, and has excavated for many years around the Black Sea. He is Editor-in-Chief of the journal Ancient West & East and its monograph supplement Colloquia Antiqua (both published by Peeters).
All those interested in classical archaeology, ancient history and Near Eastern studies.