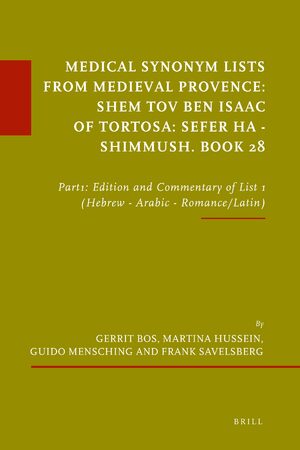 Authors: Gerrit Bos, Martina Hussein, Guido Mensching and Frank Savelsberg
Medieval synonym literature is a comprehensive field, which, as a text genre, has not received due attention in philological scholarship until now. This volume contains the first critical edition of Book 29 of Shem Tov ben Isaac's Sefer ha-Shimmush and a lexicological analysis of the medico-botanical terms in the first of the two synonym lists of this book. The Sefer ha-Shimmush was compiled in Southern France in the middle of the thirteenth century. The list edited in this volume consists of Hebrew or Aramaic lemmas, which are glossed by Arabic, Latin and Romance (Old Occitan and, in part, Old Catalan) synonyms written in Hebrew characters. Containing over 700 entries, this edition is one of the most extensive glossaries of its kind. It gives scholars a wide overview of the formation of medieval medical terminology in the Romance languages and Hebrew, as well as within the Arabic and Latin traditions.
E-Book (PDF)

€210.00$261.00
​
Add to Cart
Gerrit Bos is Professor of Jewish Studies at the University of Cologne. He has published extensively on Arabic, Judeo-Arabic and Hebrew medical literature in the Middle Ages, including the critical edition and translation of Maimonides' medical works.

Martina Hussein is an adult education lecturer and is currently completing a PhD on Arabic medical literature in the Middle Ages, including the critical edition and translation of Ibn al-Jazzar's Book of the Reliability of Simple Drugs.

Guido Mensching is Professor of Romance Linguistics at the Freie Universität Berlin. He has published extensively on Romance medical lexicology in the Middle Ages, including La sinonima delos nonbres delas medeçinas (Madrid: Arco Libros 1994) and on the syntax of the Romance languages.

Frank Savelsberg is a research fellow in Romance Linguistics at the Freie Universität Berlin. His PhD thesis focuses on Spanish Golden Age poetry, and he is active in the field of the history of the Romance languages.
INTRODUCTION
1. General overview and preliminaries
2. Medieval synonym lists in Hebrew characters
3. Shem Tov’s synonym lists in the Sefer ha-Shimmush
4. How Shem Tov’s synonym lists were compiled
5. The vernacular element
6. The edition and the commentary
Bibliography
Plates

All those interested in the history of Medicine, cultural transfer in the Middle Ages, Jewish history, and historical lexicology of romance languages (in part Occitan and Catalan) and medieval Latin.