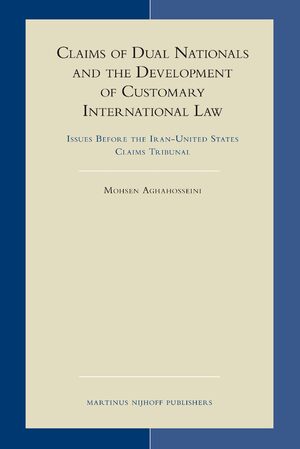 Claims of Dual Nationals and the Development of Customary International Law

Author: Mohsen Aghahosseini
The law governing the international claims of dual nationals relates to, and is influenced by, the wider subject of the individual’s standing at the international level. But while the latter had, as a result of modern trends in human rights, hugely improved as from the middle of the last century, no occasion to test its impact on such claims had arisen prior to the 1980s, when the Iran-United States Claims Tribunal - justifiably described as the most influential arbitral institution in the history of international adjudication - first became involved with the issue.
The significance of the Tribunal’s jurisprudence on the subject is not, however, limited to the judicial support it gives to the international rights of the individual. Having made its basic findings of law on the subject, the Tribunal has proceeded to apply them, for some twenty years, to a host of Cases of widely different characters. The result is a wealth of material - comprehensively reviewed in this book for the first time - which is likely to be of some benefit to those interested in this area of international law.

€136.00$169.00
​
Add to Cart
Judge Mohsen Aghahosseini has been a member of the Iran - United States Claims Tribunal since 1990. He was formerly (1991-1996) an ad hoc Judge of the International Court of Justice in the Case Concerning the Aerial Incident of 3 July 1988.
“[T]he result is a wealth of material – comprehensively reviewed in this book – which is likely to be of some benefit to those interested in this area of international law.”