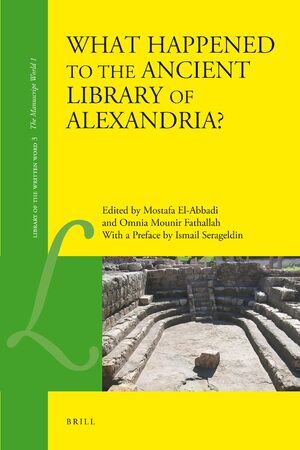 What Happened to the Ancient Library of Alexandria?

Editors: Mostafa El-Abbadi, Omnia Fathallah and Ismail Serageldin
In adopting the theme of What Happened to the Ancient Library of Alexandria? this book aims at presenting afresh, a highly specialized discussion of primary sources related to the diverse aspects and episodes of that long disputed question. The book covers a wide range of topics, beginning with an initial presentation of different Ancient Egyptian types of library institutions, with a special focus on the later Coptic Nag Hamadi Library. It then deals with the troubled times under later Ptolemies and Romans, when the Royal Library, the Daughter Library and the Mouseion, came under a succession of threats: Caesar’s Alexandrian War in 48 B.C., and during the tragic developments in the third and fourth centuries which ultimately culminated in the destruction of the Serapeum that housed the Daughter Library.
A discussion of the intellectual milieu during the fourth and fifth centuries, follows, as well as the conflicting attitudes within the Church with regard to classical learning. An analysis of historical and new archaeological evidence confirms the fact that Alexandria continued to be a city of books and scholarship centuries after the destruction of the Library.
Finally, the late medieval Arab story of the destruction of the Library by order of Caliph Omar, is fully considered and refuted through textual analysis of the original sources.

€130.00$161.00
​
Add to Cart
Mostafa A. El-Abbadi is a Professor Emeritus of Classical Studies at the University of Alexandria, Egypt, Special Advisor to the Director of the Bibliotheca Alexandrina, and President of the Archaeological Society of Alexandria. He is the author of several books and articles, including Life and Fate of the Ancient Library of Alexandria (Paris, 1990), which was translated into several languages.
Omnia M. Fathallah is Director of Public Servcies at the Bibliotheca Alexandrina (BA). She is a graduate of the University of Alexandria, Egypt (B.A., 1992), specialized in Classical Studies. In 1993, she began her librarianship career at the BA as a cataloger. In 2002, she was appointed coordinator of the Alexandria Project (AP). She organized the International Seminar “What Happened to the Ancient Library of Alexandria?” (26–28 September 2004) of which this publication is the scholarly output.
Preface
Acknowledgements
List of Illustrations
Abbreviations
Contributors
The Alexandria Project
Introduction