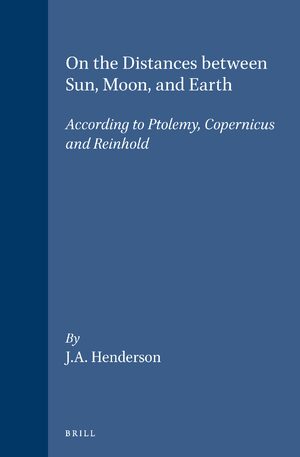 On the Distances between Sun, Moon, and Earth

According to Ptolemy, Copernicus and Reinhold

Author: Henderson
The Prutenic Tables of Erasmus Reinhold, published in 1551, were the first set of astronomical tables to use the Copernican model of the solar system. Reinhold left a detailed account of his derivation of the parameters used in these tables in his "Commentarius in opus Revolutionum Copernici". The present work is based on an analysis of this unpublished manuscript, which was rediscovered early in this century.
In particular, this work analyses the geocentric distances of the sun and moon as found in Ptolemy's Almagest, in both the manuscript version and the Nuremberg edition of Copernicus' De Revolutionibus, in Reinhold's commentary on the Almagest, and in Reinhold's commentary on this section of De Revolutionibus. Chapter one contains a detailed analysis of the lunar distance, and chapter two concerns the apparent diameters of the sun, moon and shadow. The Ptolemaic method, which is the model for Copernicus and Reinhold, requires the determination of these quantities as a preliminary to the calculation of the solar distance, which is treated in chapter three. The fourth chapter is a brief analysis of the relative magnitudes of the sun, moon and earth, which Ptolemy, Copernicus and Reinhold discuss after they have reached values of the lunar and solar distances. The final chapter concerns an application of the distances - the solar and lunar parallaxes and diameters.
Hardback

€147.00$181.00
Hardback
Add to Cart
Janice Henderson received a B.A. from Harvard College in mathematics and a Ph.D. from Yale University in the History of Science and Medicine. She has been a faculty member of the City University of New York and a member of the Institute for Advanced Study in Princeton, New Jersey.
Scholars and specialists of the History of Science.