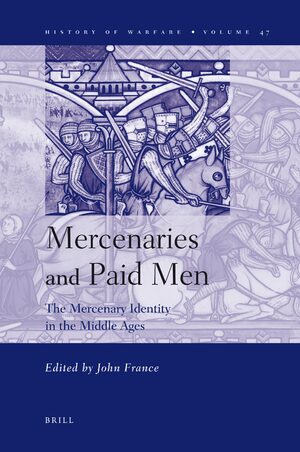 The Mercenary Identity in the Middle Ages

Series:  History of Warfare, Volume: 47
Author: John France
Mercenaries have always had a poor press. Theirs is one of the world's oldest professions, but the very word has profoundly negative connotations of infidelity and ruthlessness. But were they so different from soldiers? Why, in any case, were they so omnipresent in the warfare of the medieval and early modern period? What kind of men became mercenaries and where did they come from? These are some of the questions which the essays in this volume address.
Contributors are: Richard Abels, Bernard Bachrach, David Bachrach, Adrian Bell,Charles Bowlus, David Crouch, Guido Dall'Oro, Kelly Devries, Sven Ekdahl, John Hosler, John Law, Alan Murray, Stephen Morillo, Laura Napran, Eljas Oksanen, Carlos Andrez Gonzalez Paz, Ciaran Og O'Reilly, Muriosa Prendergast, Nicolas Prouteau, John Pryor, Ifor Rowlands, Spencer Smith.
E-Book (PDF)

€130.00$161.00
​
Add to Cart
John France, BA.PhD. (Nottingham) is Professor of Medieval History at Swansea University. He has published extensively on medieval military history, especially on the crusades. His Victory in the East is the military history of the First Crusade.
“This stimulating collection of conference papers illustrates the
changing nature of military history today. The combination of Whig
and Puritan history that made mercenaries into representatives of the
bad old days is disappearing. Historians are looking at them again,
some wanting to understand how the process of recruiting foreign (or
more local) warriors worked in social, economic, and political terms;
some recognizing that Machiavelli's contemporaries had good reasons
for ignoring his ideas; and some even seeing mercenaries as a step
toward national armies”