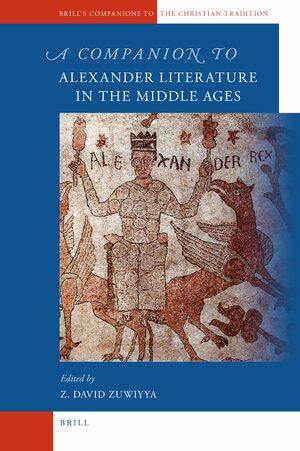 A Companion to Alexander Literature in the Middle Ages

Editor: David Zuwiyya
Never before has there appeared in English such a collection of essays concerning Alexander the Great's legacy in world literature. From Greek and Latin works of the Classical Period through Medieval texts in Syriac, Persian, Coptic, Arabic, Ethiopic and Hebrew, as well the European languages, the fourteen chapters cover the gamut of Alexander literary studies as compiled by some of the foremost scholars in each field, bringing the reader up-to-date on everything Alexander. These experts share their results after years of investigation in the field, and, in doing so, point the reader toward the essence of each of the myriad of Alexander romances, while at the same time including copious notes and bibliography to prepare the reader for his or her own Alexander journey.

€173.00$215.00
​
Add to Cart
Z. David Zuwiyya, Ph.D. (1995) in Spanish, University of California, Santa Barbara, is Professor of Spanish at Auburn University. He has published extensively on the Alexander romance and Aljamiado literature, including Islamic Legends concerning Alexander the Great (Binghamton, NY, 2001)
"The Companion to Alexander Literature of the Middle Ages offers the reader a guide to the multilingual and multicultural complexity of the medieval Alexander legend. [It] is an excellent companion to the study of the medieval Alexander traditions." – David Elton Gay, Indiana University, in: Journal of Folklore Research (September 2012) [ Full review]
Chapter One: Introduction: the Latin base texts for medieval Alexander literature, Richard Stoneman

Chapter Five: Alexander among the People of Persia, Josef Wiesehöfer

All those interested in the literature concerning Alexander the Great during the Medieval Period, as well as Alexander historians, and medievalists in general.