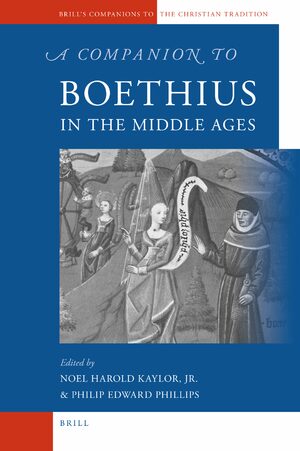 A Companion to Boethius in the Middle Ages

Editors: Noel Harold Kaylor and Philip Edward Phillips
The articles in this volume focus upon Boethius's extant works: his De arithmetica and a fragmentary De musica, his translations and commentaries on logic, his five theological texts, and, of course, his Consolation of Philosophy. They examine the effects that Boethian thought has exercised upon the learning of later generations of scholars--including, to a degree, scholars of the 21st century. The field of Boethian Studies has enjoyed a continuous history of works that treat either the entire Boethian tradition or major aspects of it. This volume offers a comprehensive study, and its construction is systematic, considering Boethius's works both as central to the disciplines that they represent and to the areas of scholarly interest that they influenced, and it is framed by articles on the historical contexts in which those works were produced.

€236.00$292.00
​
Add to Cart
Noel Harold Kaylor, Jr., Ph.D. (1985) in comparative literature, Vanderbilt University, is Professor of English at Troy University. He has published extensively on Boethius, including The Medieval Consolation of Philosophy (1992), John Bracegirdle’s Psychopharmacon (1999), New Directions in Boethian Studies (2007), and The Consolation of Queen Elizabeth I (2009). He is co-editor of Carmina Philosophiae and Executive Director of the International Boethius Society.

Philip Edward Phillips, Ph.D. (1996) in English, Vanderbilt University, is Interim Associate Dean of the University Honors College and Professor of English at Middle Tennessee State University. He is the author of John Milton’s Epic Invocations (2000) and the coeditor of New Directions in Boethian Studies (2007) and The Consolation of Queen Elizabeth I (2009). He is co-editor of Carmina Philosophiae and Secretary of the International Boethius Society.

"The present volume contains high-quality essays that will be of considerable value to scholars working within the field of Boethian studies [...]. Thus, while the essays are often not definitive or the “last word” in any sense, they provide a rich point of departure for further study. As such, I highly recommend the volume to scholars whose work is focused on this great Italian scholar and his lasting influence." - John T. Slotemaker, Fairfield University, in: Theological Studies 74/2 (June 2013). p. 527
“A reviewer must always be cautious and circumspect when tempted to declare a critical work definitive, and in this case it is warranted: A Companion to Boethius in the Middle Ages is the most comprehensive and reliable one-volume critical study of Boethius available today. It is an indispensable book for any serious student of intellectual history in general and medieval textual studies in particular […]. Masterfully conceived and executed, this volume reminds readers in rich and numerous ways of the central place that Boethius occupies not only in the development of university curricula, but also in philosophical and religious thought as well as in the history of mathematics and of science; and, moreover it must be added, in the Western literary tradition as well […]. As such A Companion to Boethius in the Middle Ages should be in every library at institutions of higher learning and owned personally by anyone seriously engaged in the study of medieval or early modern thought, culture, or literature.” - William E. Engel, The University of the South, in: Carmina Philosophiae: Journal of the International Boethius Society, Vol. 21 (2012), pp. 127-135
“Kaylor and Phillips must be commended for assembling an unusually comprehensive and coherent volume of collected essays […]. The utility of this volume to advanced students and scholars involved in the study of readership communities and reception, medieval education and intellectual culture, the history of science, medieval literature and the transmission of Latin to vernacular literatures cannot be overestimated. Any one of the inclusive chapters could easily serve as a gateway to a proper monographic study concerned with some aspect of Boethius' legacy and the volume is certain to serve as an indispensable reference […]. A Companion to Boethius in the Middle Ages is an excellent contribution to medieval studies.” - Shane Bjornlie, Claremont McKenna College, in: The Medieval Review (June 2013)
" A Companion to Boethius in the Middle Ages excels in three primary respects: first, as a description of scholarly consensus and competing strands in Boethian scholarship; second, as a handbook of the most valuable bibliography in each chapter’s copious but discriminating footnotes in addition to Phillips’ formal bibliography; third, as a collection of field-changing research pointing toward shifts in Boethian studies, including the mainstreaming of vernaculars alongside Latin, and the growing reliance upon manuscript studies, both physical and digital. The volume, devoted to perhaps the greatest author of the Middle Ages, may serve as then as an introduction not only to Boethius himself, but to medieval culture as well, including reading practices, education, translation, and cosmology.” - Melinda Nielsen, Baylor University, in: Bryn Mawr Classical Review 2014.05.48
“an essential starting place for new research on the legacy of Boethius. This volume is an admirable achievement: a compilation of serious scholarship that deserves a place on any medievalist’s shelf." - Jeffrey C. Witt, Loyola University Maryland, in: Religious Studies Review, Vol. 40, No. 2 (June 2014), p. 109
“Noel Harold Kaylor and Philip Edward Phillips’s Companion to Boethius in the Middle Ages powerfully communicates Boethius’s centrality in European intellectual history by advancing our understanding of Boethian texts, contexts, and afterlives in a coherent and successfully interdisciplinary volume. […] This volume provides essential new reading for scholars of any discipline seeking innovative, engaging scholarship on Boethius, his corpus, and the reception of these across much of Europe in the Middle Ages.” - Kylie Murray, Christ’s College, Cambridge, in: Speculum, Vol. 93, No. 3 (July 2018), pp. 863–865
Acknowledgments
Preface
Introduction: The Times, Life, and Work of Boethius
Noel Harold Kaylor, Jr.
Boethius’s Astronomy and Cosmology
Stephen C. McCluskey
The Latin Commentaries on Boethius’s De consolatione philosophiae from the 9th to the 11th Centuries
Rosalind C. Love
Boethius’s De institutione arithmetica and its Influence on Posterity
Jean-Yves Guillaumin
Boethius’s Influence on Theology and Metaphysics to c.1500
Siobhan Nash-Marshall
Boethius’s Works on Logic in the Middle Ages
John Patrick Casey
Boethius’s Influence in Anglo-Saxon England: The Vernacular and the De consolatione philosophiae
Paul E. Szarmach
Boethius’s Influence on German Literature to c.1500
Christine Hehle
Boethius in Medieval France: Translations of the De consolatione philosophiae and Literary Influence
Glynnis M. Cropp
Readers and Interpreters of the Consolatio in Italy, 1300–1500
Dario Brancato
Making the Consolatio in Middle English
Ian Johnson
The Enduring Legacy of Boethian Harmony
Mark T. Rimple
The Quadrivium and the Decline of Boethian Influence
Ann E. Moyer
Afterword: Boethius in Late Antiquity and the Early Middle Ages
Fabio Troncarelli
Anicius Manlius Severinus Boethius: A Chronology and Selected Annotated Bibliography
Philip Edward Phillips
List of Contributors
Index of Manuscripts Cited
Index

All those interested in Boethius, his life, major works, reception, and influence from late antiquity through the early modern period.