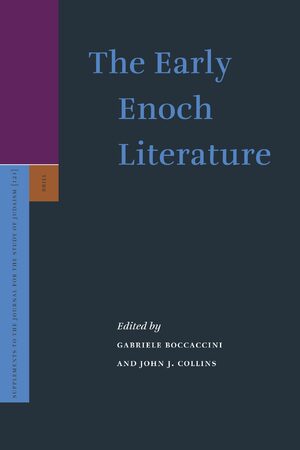 Editors: Gabriele Boccaccini and Collins
In recent years there has been a lively debate about the early Enoch literature and its place in Judaism. This volume is intended to represent that debate, by juxtaposing pairs of articles on several key issues: the textual evidence, the relationship to the Torah, the calendar, the relation to wisdom, the relation to the temple, the sociological setting and the relation to the Dead Sea Scrolls. It is not the intention of the editors to impose a consensus, but rather to stimulate discussion by bringing together divergent viewpoints. The book should be a useful textbook not only on the Enoch literature and apocalypticism, but more generally on Second Temple Judaism.
E-Book

€165.00$206.00
​
Add to Cart
Gabriele Boccaccini, Ph.D. Turin (1991) is Professor of Second Temple Judaism and Christian Origins at the University of Michigan. He is editor-in-chief of the Journal Henoch, director of the Enoch Seminar and editor of its Proceedings.Among his publications are Beyond the Essene Hypothesis: The Parting of the Ways between Qumran and Enochic Judaism (Eerdmans, 1998), Roots of Rabbinic Judaism: An Intellectual History, from Ezekiel to Daniel (Eerdmans, 2001).

John J. Collins, Ph.D. Harvard (1972) is Holmes Professor of Old Testament at Yale Divinity School. He has published extensively on the Hebrew Bible, Dead Sea Scrolls, and Second Temple Judaism. His more recent books include Introduction to the Hebrew Bible (Fortress, 2004), Jewish Cult and Hellenistic Culture (Brill, 2005), Encounters with Biblical Theology (Fortress, 2005), and The Bible after Babel. Historical Criticism in a Postmodern Age (Eerdmans, 2005).
"This a valuable collection on some of the key issues that remain the focus of the Enoch Seminar but also of scholarship in general concerned to understand intellectual movements within Second Temple Judaism and, more especially, the documents that survive." - William R. G. Loader - Murdoch University, Murdoch, Australia