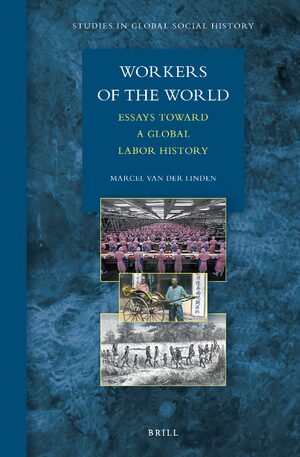 Workers of the World

Essays toward a Global Labor History

Series:  Studies in Global Social History, Volume: 1
Author: Marcel van der Linden
The studies offered in this volume contribute to a Global Labor History freed from Eurocentrism and methodological nationalism. Using literature from diverse regions, epochs and disciplines, the book provides arguments and conceptual tools for a different interpretation of history – a labor history which integrates the history of slavery and indentured labor, and which pays serious attention to diverging yet interconnected developments in different parts of the world. The following questions are central:
▪ What is the nature of the world working class, on which Global Labor History focuses? How can we define and demarcate that class, and which factors determine its composition?
▪ Which forms of collective action did this working class develop in the course of time, and what is the logic in that development?
▪ What can we learn from adjacent disciplines? Which insights from anthropologists, sociologists and other social scientists are useful in the development of Global Labor History?

€53.00$65.00
​
Add to Cart
Marcel van der Linden (1952) is Research Director of the International Institute of Social History and Professor of social movement history at the University of Amsterdam. He has published extensively on labor and working-class history and on the history of ideas.
"[The author] relies on a wealth of selective examples to lay out a rich set of frameworks for the undertaking of transnational, comparative, and/or global labor analyses - that means plans for future historical inquiries."
Leon Fink, Department of History, University of Illinois at Chicago, reviewed for geschichte.transnational and H-Soz-u-Kult (09-07-2010)

"Marcel van der Linden’s book ‘Workers of the World: Essays toward a Global Labor History’ is an encyclopaedic, thought provoking, tour de force on the field of labour relations that scholars from different disciplines should read (and possibly internalise)."
Maurizio Atzeni, Review in History, (review no. 908)

"winner of the René Kuczynski Prize for the best book on social and economic history of 2008: the award committee's reader Prof. John Womack (Harvard) described Marcel van den Linden in his recommendation as "the most important and most learned labor historian of his generation in the world."

"a work of considerable theoretical depth and empirical novelty yet structured, presented and written with admirable clarity"
Peter Waterman in Development and Change

This is a remarkably ambitious and useful study, a series of offerings from the author’s career-long musings on labour history and the possibilities of a global labour history. Thus, it reflects his extraordinary researchings into the nature of labour history, mainly as experienced in Europe and the United States but with considerable materials drawn from other regions as well. It is an introductory work, albeit a very complex one, based on secondary sources, and indeed should serve as a handbook for those concerned with labour and global labour issues.
Donald Quataert in Journal of Global History 5:3

Conceptualizations
2. Who are the workers?
3. Why `free’ wage labor?
4. Why chattel slavery?