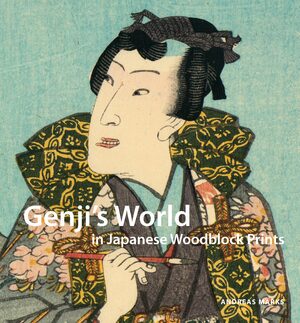 Author: Andreas Marks
Genji's world in Japanese Woodblock Prints provides the first comprehensive overview of Genji prints, an exceptional subject and publishing phenomenon among Japanese woodblock prints that gives insight into nineteenth-century Japan and its art practices.
In the late 1820s, when the writer Ryūtei Tanehiko (1783–1842), the print designer and book illustrator Utagawa Kunisada (1786–1865) and the publisher Tsuruya Kiemon sat down together in Edo to plot the inaugural chapter of the serial novel A Rustic Genji by a Fraudulent Murasaki (Nise Murasaki inaka Genji), it is doubtful that any one of them envisioned that their actions would generate a new genre in Japanese woodblock prints that would flourish until the turn of the century, Genjie (“Genji pictures”). During these sixty years, over 1,300 original designs were created, of which many were very popular at their time of release.
The story of A Rustic Genji, set in fifteenth-century Japan, is in many respects drawn from Murasaki Shikibu’s (c.973–1014/25) classic novel The Tale of Genji from the early eleventh century.
As the foremost collection of prints of this subject, the extensive holdings of Paulette and Jack Lantz provided the majority of images necessary for this publication.
Hardback

€92.00$122.00
Hardback
Add to Cart
Andreas Marks is Director and Chief Curator at the Clark Center for Japanese Art and Culture. He received his Ph.D. in Japanese art history from Leiden University, The Netherlands, and a M.A. in East Asian art history and Chinese studies from Bonn University, Germany. As a specialist in Japanese art, he is the author of Japanese Woodblock Prints: Artists, Publishers and Masterworks, 1680–1900 (2010), Publishers of Japanese Prints: A Compendium (Hotei Publishing, 2011), Fukami: Purity of Form (2011), and Kamisaka Sekka: Rinpa Traditionalist, Modern Designer (2012). His book Tōkaidō Print Series: Kunisada’s Puzzles is forthcoming from Hotei Publishing.
" Genji’s World in Japanese Woodblock Prints from the Paulette and Jack Lantz collections by Andreas Marks and contributors offers the most comprehensive survey of these Genji prints to-date. (…) The generous provision of Genji prints in this book makes this by-way of ukiyo-e, this remarkable publishing phenomenon, accessible to scholars and collectors as never before." Ellis Tinios, Print Quarterly (XXXI, 2014/3, pp.326-327)
Scholars, curators, art dealers and collectors of Japanese art, in particular Japanese prints. This study is also of interest to scholars of Japanese literature (Tale of Genji and A Rustic Genji) and scholars of publishing history in Japan.