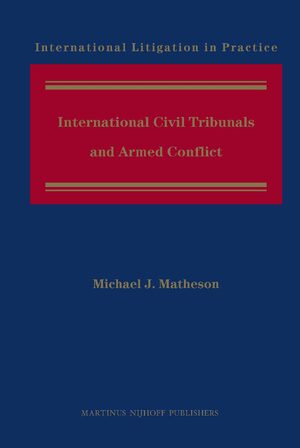 Author: Michael Matheson
At various times in modern history, the international community has turned to international litigation as a hoped-for means of avoiding, ending, or dealing with the consequences of armed conflict; but until the past three decades, such litigation rarely had a significant impact. However, since the 1980s, international civil tribunals have become increasingly involved in armed conflicts, sometimes with important results. This book explores the recent cases in which the International Court of Justice and other tribunals have dealt with such situations. It assesses the manner in which these cases have been decided, the degree to which they have affected the resolution of the conflicts in question, and their contribution to the development of the applicable substantive law.
E-Book (PDF)

€160.00$198.00
​
Add to Cart
Michael J. Matheson, LLB (1968), Stanford Law School, teaches at George Washington University Law School. He was a senior lawyer and diplomat in the U.S. State Department, has taught at several universities, and has published extensively on international law topics.
“This book is a remarkable analysis of the decisions of international civil tribunals – notably the International Court of Justice (ICJ) and arbitral tribunals – with respect to both the legality of recent armed conflicts and the legality of actions during those conflicts…This timely book presents a fine summary and analysis of the decisions and awards of these international civil tribunals. It should be of high value to all who want to keep current with developments in the international law relevant to armed conflict.” – George H. Aldrich, American Journal of International Law
Table of Cases

Part I. The Involvement of International Civil Tribunals in
Armed Conflict

Chapter 4. Jurisdiction
I. The International Court of Justice
4.1. Declarations under Article 36(2)
4.2. Treaty provisions generally consenting to the
Court’s jurisdiction
4.3. Treaty provisions consenting to jurisdiction
over disputes under that treaty
4.4. Cases brought with the specific consent of the
parties to the dispute
4.5. Advisory cases
II. Other Tribunals
4.6. The UN Compensation Commission
4.7. The Eritrea-Ethiopia Claims Commission
4.8. Assessment

Chapter 7. Determining the Facts on the Merits
7.1 The burden and standard of proof
7.2 Forms of evidence
7.3 Reliance on other fact-finders
7.4 Independent tribunal fact-finding
7.5 Assessment

Chapter 8. Adjudicating the Law on the Merits
8.1 Contentious cases
8.2 Advisory cases
8.3 Articulation of the law
8.4 What substantive issues the tribunal addresses
8.5 Interaction among tribunals
8.6 Interaction with non-judicial organs
8.7 Assessment

Chapter 10. Resort to Force
10.1 Response to attacks by the forces of another state
10.2 Support or tolerance of non-state groups
10.3 Collective response to attacks
10.4 Necessity and proportionality in the use of force
10.5 Involvement of the Security Council
10.6 Issues not decided
10.7 Assessment

Chapter 11. Law of Armed Conflict
11.1. Applicability of agreements
11.2. Conduct of military operations
11.3. Treatment of persons
11.4. Responsibility for the actions of others
11.5. Assessment

Institutions, officials, teachers and students interested in the prevention and resolution of armed conflicts, and in the operation of international tribunals in the modern period.