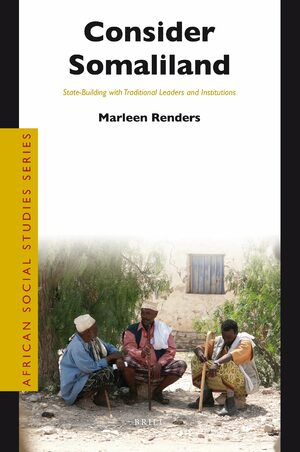 State-Building with Traditional Leaders and Institutions

Author: Marleen Renders
Can ‘traditional’ leaders and institutions help to build more legitimate, accountable and effective governments in polities or ‘states’ under (re)construction? This book investigates the case of “Somaliland”, the 20-year old non-recognized state which emerged from Somalia’s conflict and state collapse. A careful analysis of Somaliland’s political history, it outlines the complex and evolving institutional and power dynamics involving clan elders, militia leaders, guerrilla movements, as well as politicians and civil servants in its emerging state structures. While showing the great potential of endogenous processes, it clearly demonstrates the complexity and the politics of those processes and the necessity to think beyond one-size-fits-all state-building formulas.
E-Book (PDF)

€75.00$97.00
​
Add to Cart
Marleen C.M. Renders, Ph.D. (2006) in Political Science, Ghent University, is a research associate at the Human Rights Centre of the same University. She was Fellow at the Somaliland Academy for Peace and Development in Hargeysa and has published several articles on state formation in Somaliland. She currently lives and works in Nairobi.
'Renders (Ghent Univ., Belgium) is as comfortable in explaining the (in) applicability of the Weberian theory of the state in this context as she is in elucidating the role of clan elders in the complex governance of the present state-like entity. She labels Somaliland a "hybrid political order (HPO)." Although densely argued, the book makes an important contribution to empirical political theory and comparative Afiican studies.
Summing Up: Recommended. Graduate, research, and professional collections'.

'This book is a timely contribution to the discourse on 'stateness' - the concept of becoming a state - in Somali Studies. Renders has produced an elegantly written book that adds fresh insight into statebuilding in fragile and failing states'.