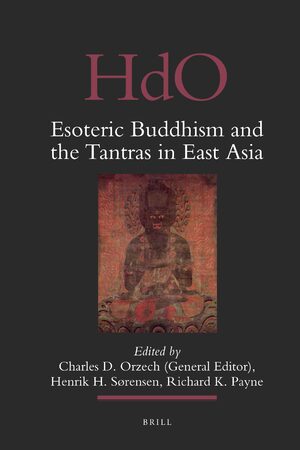 Esoteric Buddhism and the Tantras in East Asia

Series:  Handbook of Oriental Studies. Section 4 China, Volume: 24
Editors: Richard Payne and Henrik Sørensen
Editor-in-Chief: Charles Orzech
In all likelihood, it was the form of Buddhism labeled “Esoteric Buddhism” that had the greatest geographical spread of any form of Buddhism. It left its imprint not only on its native India, but far beyond, on Southeast Asia, Central Asia, including Tibet and Mongolia, as well as the East Asian countries China, Korea and Japan. Not only has Esoteric Buddhism contributed substantially to the development of Buddhism in many cultures, but it also facilitated the transmission of religious art and material culture, science and technology. This volume, the result of an international collaboration of forty scholars, provides a comprehensive resource on Esoteric Buddhism and the Tantras in their Chinese, Korean, and Japanese contexts from the first few centuries of the common era right up to the present.

Charles D. Orzech, Ph.D. (1986) in Divinity, University of Chicago, is Professor of Religious Studies at the University of North Carolina Greensboro. He has published extensively on Esoteric Buddhism in China and is the author of Politics and Transcendent Wisdom (Penn State Press, 1998).
Henrik H. Sørensen, Ph.D (1988) University of Copenhagen, has written widely on Chan and Son, on Asian art, and on Esoteric Buddhism in China and Korea. He has directed the Seminar for Buddhist Studies (Copenhagen) and edited its publication series.
Richard K. Payne, Ph.D. (1985) in the History and Phenomenology of Religion at the Graduate Theological Union, Berkeley, is Dean of the Institute of Buddhist Studies in Berkeley. He also trained at Mt. Kōya and has written and edited several volumes including Tantric Buddhism in East Asia (Wisdom, 2005).

"For its sheer scale and range, the work presents itself as a unique one and offers itself as a source-book on the none too easily definable or circumscribable form of esoteric and/or tantric Buddhism for a wider public."
Benedict Kanakappally, OCD, Bibliographia Missionaria LXXV 2011
Acknowledgements
List of illustrations

ESOTERIC BUDDHISM IN JAPAN
XII: Esoteric Buddhism in Japan during the Nara and Heian (art. 59-67)
XIII: Medieval (Kamakura, Muromachi and Azuka–Momoyama) (art. 68-79)
XIV: Early Modern, Modern and Contemporary (Edo, Meiji, and up to the Present) (art. 80-87)

All those interested in East Asian history, the history of Buddhism and its spread throughout China, Korea, and Japan, and those interested in the tantras and their transformation in East and Central Asia. Also specialists in linguistics and philology, Buddhist ritual and practice.