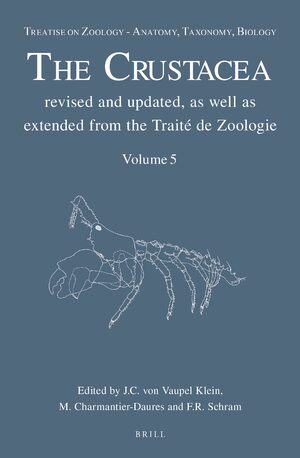 For those working on Arthropoda, it will be obvious that the chapters on Pentastomida are newly conceived. The other chapters in this book constitute updated translations of contributions in the French edition of the Traité, volume 7(III)(A), while the order Bochusacea, not featuring in the French version as only more recently described, has been added in a combined treatment with the two closely similar orders.
Overall, this constitutes the eighth tome published in this English series, viz., preceded by volumes 1 (2004), 2 (2006), 9A (2010), 9B (2012), 3 (2012), 4A (2013), and 4B (2014). From vol. 4A onward the chapters are no longer published in the serial sequence as originally envisaged, because the various contributions, both the updates and the entirely new chapters, become available in a more or less random order. Yet, when completing this series, all major issues as well as all taxa currently recognized will have been treated.

€245.00$320.00
​
Add to Cart
J.C. von Vaupel Klein, formerly at the University of Leiden and still managing editor of Crustaceana, is principal translator of the French volumes of the Traité and coordinating editor of this series as a whole.

M. Charmantier-Daures is a former associate professor at the University of Montpellier and well known for her work on crustacean ecophysiology. She also is an editor of Crustaceana – International Journal of Crustacean Research.

All biologists working on or with Crustacea in every discipline, as well as soil biologists and fishery biologists, but also veterinarians, medical parasitologists, as well as those studying environmental pollution.