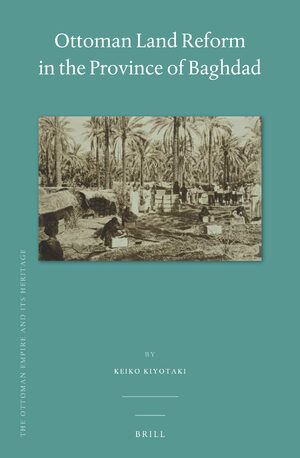 Ottoman Land Reform in the Province of Baghdad

Author: Keiko Kiyotaki
In Ottoman Land Reform in the Province of Baghdad, Keiko Kiyotaki traces the Ottoman reforms of tax farming and land tenure and establishes that their effects were the key ingredients of agricultural progress. These modernizing reforms are shown to be effective because they were compatible with local customs and tribal traditions, which the Ottoman governors worked to preserve.
Ottoman rule in Iraq has previously been considered oppressive and blamed with failure to develop the country. Since the British mandate government’s land and tax policies were little examined, the Ottoman legacy has been left unidentified. This book proves that Ottoman land reforms led to increases in agricultural production and tax revenue, while the hasty reforms enacted by the mandate government ignoring indigenous customs caused new agricultural and land problems.
E-Book (PDF)

€115.00$139.00
​
Add to Cart
Keiko Kiyotaki, Ph.D. (1997), University of Wisconsin–Madison, is Department Affiliate of Near Eastern Studies at Princeton University. She has published articles on Iraq under Ottoman rule and during the British mandate period.
Acknowledgements
List of Figures, Maps, and Tables

1 The Province of Baghdad

6 Modifications of the Land and Tax Systems

8 The Decline of the Ottoman Legacy

All interested in the history of Iraq and the Ottoman Empire, and anyone concerned with agriculture, land tenure, and taxation.