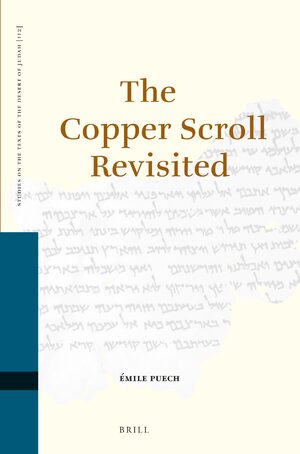 Author: Emile Puech
This book is the English translation of the new edition of the Copper Scroll of Qumran Cave 3 (3Q15). The restoration of the three sheets of copper by the Mécénat of the French Electric Company (EDF) in the 1990s made an improved decipherment possible. The physical restoration of the complete scroll is published in the two large volumes of the French edition accompanied by many photographs and drawings, which the reader will find to be sufficient. Le Rouleau de cuivre de la Grotte 3 de Qumrân (3Q15). Expertise - Restauration - Épigraphie. Volume I - Texte, Volume II - Planches (2006). The English translation of the new edition of the engraved text will favor easier access to the new results for a wider public.
E-Book (PDF)

€91.00$131.00
​
Add to Cart
Émile Puech, Dr Dr (1992) in Theology at the Institut Catholique de Paris and in History of Religions and Religious Anthropology at the Sorbonne Paris IV, Hab. (2001) at Marc Bloch University, Strasbourg II is Director of Research at the French National Center for Scientific Research, LESA UMR 8167, Collège de France, Paris, and Professor of Epigraphy, Semitic languages and Dead Sea Scrolls at the École Biblique et Archéologique Française de Jérusalem.
He has published the Hebrew and Aramaic manuscripts of Starcky's lot (Cave 4) and many researches on West Semitic Epigraphy and related subjects.
All those interested in the Dead Sea Scrolls, Ancient Judaism, the Essene Community, as well as Semitic philology, Hebrew language, and history.