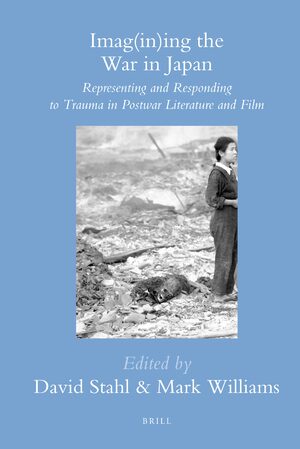 Imag(in)ing the War in Japan

Representing and Responding to Trauma in Postwar Literature and Film

Editors: Mark Williams and David Stahl
This study of a series of artistic representations of the Asia Pacific War experience in a variety of Japanese media is premised on Walter Davis' assertion that traumatic events and experiences must be 'constituted' before they can be assimilated, integrated and understood. Arguing that the contribution of the arts to the constitution, integration and comprehension of traumatic historical events has yet to be sufficiently acknowledged or articulated, the contributors to this volume examine how various Japanese authors and other artists have drawn upon their imaginative powers to create affect-charged forms and images of the extreme violence, psychological damage and ideological contradiction surrounding the War. In so doing, they seek to further the process whereby reading and viewing audiences are encouraged to virtually engage, internalize, 'know' and respond to trauma in concrete, ethical terms.
E-Book

€157.00$195.00
​
Add to Cart
Mark Williams, Ph.D. (1991) in Japanese Literature, University of California, Berkeley, is Professor of Japanese Studies and Chair of the School of Modern Languages and Cultures at the University of Leeds, UK. He has published extensively on Japanese literature of the immediate postwar period, including Endō Shūsaku: A Literature of Reconciliation (Routledge, 1989).
David C. Stahl, Ph.D. (1994) in Japanese Literature, Yale University, is Associate Professor of Japanese Literature and Cinema and Chair of the Department of Asian and Asian American Studies at Binghamton University (SUNY). He has published on Japanese survivor representation of and response to war trauma, including Burdens of Survival: Ōoka Shōhei's Writings on the Pacific War (University of Hawai'i, 2003).
'Stahl and Williams (...) make a solid contribution to understandings of trauma and Japanese art, literature, and film, complementing other recent works like Legacies of the Asia-Pacific War.'
Erik Ropers, Towson University, Melbourne Historical Journal, 40
All those interested in Japanese Studies, particularly those with an interest in the traumas, memories, artistic responses to and legacies of the Asia Pacific War.