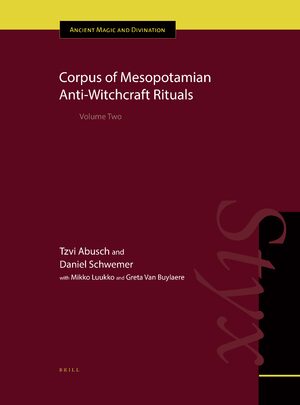 Authors: Tzvi Abusch and Daniel Schwemer
Among the most important sources for understanding the cultures and systems of thought of ancient Mesopotamia is a large body of magical and medical texts written in the Sumerian and Akkadian languages. An especially significant branch of this literature centres upon witchcraft. Mesopotamian anti-witchcraft rituals and incantations attribute ill-health and misfortune to the magic machinations of witches and prescribe ceremonies, devices, and treatments for dispelling witchcraft, destroying the witch, and protecting and curing the patient. The Corpus of Mesopotamian Anti-Witchcraft Rituals aims to present a reconstruction of this body of texts; it provides critical editions of the relevant rituals and prescriptions based on the study of the cuneiform tablets and fragments recovered from the libraries of ancient Mesopotamia.


"Now that we have the second volume, we the more admire the thoughtful organisation of the entire project, the strict methods followed, and the insightful observations and decisions made." Martin Stol, Bibliotheca Orientalis lxxIV n° 3-4, mei-augustus 2017
E-Book (PDF)

€223.00$276.00
​
Add to Cart
Tzvi Abusch, Ph.D. (1972), Harvard University, is Cohen Professor of Assyriology and Ancient Near Eastern Religion at Brandeis University. Some of his studies on Babylonian witchcraft are reprinted in Mesopotamian Witchcraft (Brill, 2002); he recently published a critical edition of the anti-witchcraft ceremony Maqlû (Brill, 2015).
Daniel Schwemer, Ph.D. (2000), Habilitation (2005), Würzburg University, is Professor of Ancient Near Eastern Studies at Würzburg University. He has published extensively on ancient Near Eastern religion and magic including Abwehrzauber und Behexung (Harrassowitz, 2007).
"Now that we have the second volume, we the more admire the thoughtful organisation of the entire project, the strict methods followed, and the insightful observations and decisions made." - Marten Stol, Leiden, Bibliotheca Orientalis, vol. 74, no.3-4 (2017)
PREFACE
ABBREVIATIONS AND SYMBOLS
INTRODUCTION
TEXTS OF GROUP THREE: PRESCRIPTIONS FOR SYMPTOMS INDICATING WITCHCRAFT
TEXTS OF GROUP SEVEN: UŠBURRUDA TEXTS
TEXTS OF GROUP EIGHT: CEREMONIAL RITUALS FOR UNDOING WITCHCRAFT
TEXTS OF GROUP NINE: ANTI-WITCHCRAFT INCANTATIONS WITHIN BĪT RIMKI AND RELATED TEXTS
TEXTS OF GROUP TEN: RITUALS AGAINST ZIKURUDÛ AND OTHER SPECIAL TYPES OF WITCHCRAFT
TEXTS OF GROUP ELEVEN: RITUALS IN CASE OF EVIL OMENS INDICATING WITCHCRAFT
ADDITIONAL TEXTS TO VOLUME 1
ADDITIONS AND CORRECTIONS TO VOLUME 1
BIBLIOGRAPHY (VOLUMES 1–2)
CONCORDANCES (VOLUMES 1–2)
REGISTERS (VOLUMES 1–2)
COPIES OF CUNEIFORM TEXTS
COLLATIONS

All those interested in religion, witchcraft beliefs, magic, and medicine in antiquity, as well as students of the ancient Near East, Egypt, and the Bible.