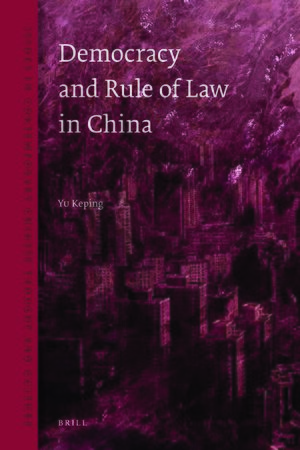 Democracy and the Rule of Law in China

Editor: Keping Yu
Democracy and the Rule of Law in China is intended to make available to English-language readers debates among prominent Chinese intellectuals and academics over issues of political, constitutional, and legal reform; modes of governance in urban and rural China; and culture and cultural policy. China’s unprecedented economic development following the implementation of the Reform and Opening policy has drawn widespread international attention; yet accompanying political developments have been largely overlooked. A compilation of the works of twelve contemporary Chinese scholars, this book offers unique insights into the wealth of viewpoints and diversity of issues influencing and defining the development of democracy and the rule of law in China. Based on theoretical and practical analyses of China’s political development to date, the authors propose specific models for the expansion of democratic mechanisms already present in the current political structure. Exploring topics ranging from autonomous village governance and grassroots elections to constitutional reform and judicial independence, the authors are unified on one point: China’s political development must pursue a gradual, distinctly-Chinese course in order to promote social stability, continued economic advancement, and the establishment of a socialist democratic society.
E-Book

€41.00$50.00
​
Add to Cart
Yu Keping, Ph.D. (1988) in Political Science, Peking University, is Professor & Director of the China Center for Comparative Politics and Economics. He has published extensively on political philosophy and China's political reform. His major works include The Institutional Environment of Civil Society in China (2006).
PART ONE
DEMOCRACY—THEORETICAL ISSUES

Toward an Incremental Democracy and Governance: Chinese Theories and Assessment Criteria
Yu Keping
An Analysis of the Basic Theoretical Problems Concerning Democracy in China
Gu Su
Democratization: The Chinese Model and Course of Political Development
He Zengke

PART THREE
ON THE RULE OF LAW

All those interested in governmental reform, governance, the development of the rule of law, and the political development in China.