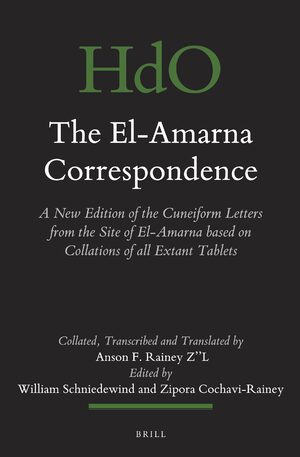 Series:  Handbook of Oriental Studies. Section 1 The Near and Middle East, Volume: 110
Editors: William M. Schniedewind and Zipora Cochavi-Rainey
Author: Anson F. Rainey
The El-Amarna Correspondence offers a completely new edition of the Amarna Letters based on personal inspection and reading of all the extant tablets. This edition includes new transcriptions and a translation along with an extensive introduction and glossary of the Amarna Letters.
E-Book (PDF)

€240.00$314.00
​
Add to Cart
William M. Schniedewind is a Professor of Biblical Studies and Northwest Semitic Languages at UCLA. He holds the Kershaw Chair in Ancient Eastern Mediterranean Studies, and he is the author of several books including A Social History of Hebrew: Its Origins through the Rabbinic Period (2013).
Zipora Cochavi-Rainey, Ph.D. (1989), Beit Berl College, is Professor of Hebrew Studies at that college. She studied Semitic languages and Egyptian at Tel Aviv University. Cochavi-Rainey has published books and articles on Akkadian, including The Akkadian Dialect of the 14th to the 13th Centuries BCE AOAT 374 (Münster: Ugarit Verlag. 2011); The Akkadian Texts Written by Alashian Scribes in the 14th-13th Centuries (Munster: Ugarit Verlag. 2003). In addition, she has published books and articles detailing the literary and linguistic analysis of modern Hebrew literature.
Volume 1
Foreword
Introduction
Discovery, Research, and Excavation of the Amarna Tablets The Formative Stage (Jana Mynářová)
Bibliography
Technical matters
The Tell el-Amarna Letters: Transcription and Translation
Glossary (Alice Mandell)
Volume 2
Introduction
Technical matters
Commentary, letter by letter
Bibliography
All interested in the history of ancient Canaan and Israel as well as the New Kingdom of Egypt. The book should be purchased academic and public libraries, undergraduate and graduate students, and specialists in a variety of fields pertaining to the ancient near east.